A Letter to My Fellow Anglers: Don't hang it up. Stand Up.

As anglers, it's difficult to fully understand the impacts caused while sport fishing in the modern world. Compared to the ’80s, when fishing gear was limited and there weren’t as many people out on the water, today’s anglers are more successful at connecting and catching a higher percentage of fish in a population.

This increased efficiency raises the question: what are the impacts we anglers cause to the fishery and how is that affecting the future of our Salmon and Steelhead populations in the Pacific Northwest?

This question isn’t an easy one to answer, but there is an overwhelming amount of scientific evidence showing anglers cause impact. We anglers are damn good at catching fish. Angling causes mortality at differing levels depending on the methods and tackle being used to catch fish and whether we kill/harvest the fish or not. It’s why data about the methods we use to angle, how often we angle, and how successful we are is necessary for fisheries managers to collect and utilize to ensure that the impacts we anglers do have can be sustained by a population.

With the issues of wild Steelhead harvest on Oregon’s Rogue and south coast rivers about to be decided, it’s critical that we anglers understand the impact of our interactions with these fish and what the state needs in order to ensure that we have sustainable, abundant populations of wild Steelhead in southwest Oregon for years to come.

Let's start by discussing some of the different types of “take,” or mortality, in any population of fish. These include:

These four areas of mortality are not the only mortality occurring in these watersheds, but they are the four that all fisheries managers must take into consideration when attempting to manage any population sustainably. Without acknowledging each and every one, there will be critical gaps in data collection that will affect the long-term health of a population.

Now that we have discussed numerous types of “take,” or mortality, occurring in any fishery, I want to compare these harmful effects to the management in the Rogue and south coast waters of southern Oregon with a specific understanding of how fisheries managers are evaluating harvest and catch and release mortality. These numbers are used to evaluate a harvest rate, or the number of wild Winter Steelhead that are removed from the spawning population by anglers.

In the waters of southern Oregon, wild winter Steelhead harvest is allowed in nine different rivers. These watersheds can be separated into two different areas, the Rogue Basin and streams along the south coast (rivers south of the Rogue down to the California border).

Fisheries managers do not have accurate adult population estimates for wild Winter Steelhead in any of the nine streams where harvest of wild Steelhead will continue if the proposed management plan is adopted. Along with a lack of adult fish data, fisheries managers don’t have accurate data for how many wild Winter Steelhead are caught and released or killed/harvested each year. Harvest cards are available, but there is no requirement that anglers return them. As you can imagine, the Department of Fish and Wildlife doesn’t receive many harvest cards back each year, leaving fisheries managers guessing about how many fish were harvested.

And ODFW fisheries managers fail to acknowledge any other mortality besides harvest or direct kill of wild Winter Steelhead in the watersheds of the Rogue and south coast. They have no current data supporting what is currently being harvested or killed. Why would a managing agency take so much risk without knowing what is currently happening?

Managing Without All the Puzzle Pieces

Washington utilizes an10% catch and release mortality rate for managing wild Steelhead fisheries. This is supported by the best available science and the regulations allowed in the fisheries. They then use population estimates coupled with creel surveys (surveys taken on boat ramps and in popular fishing areas, asking folks simple questions such as: How many fish did you catch? Wild fish or hatchery fish? Did you keep any? etc.). Utilizing these data points, WDFW can estimate how many fish were caught and released by anglers, how many hatchery fish were harvested (wild harvest is no longer allowed in Washington), and how many fish escaped the fishery (did not get caught or harvested or perished before spawning). Based on the information gathered in the creel surveys, they can take the number of fish caught and assume that 10% of those fish will die before spawning, giving them a catch and release mortality (CnR Mortality). Here is an example: 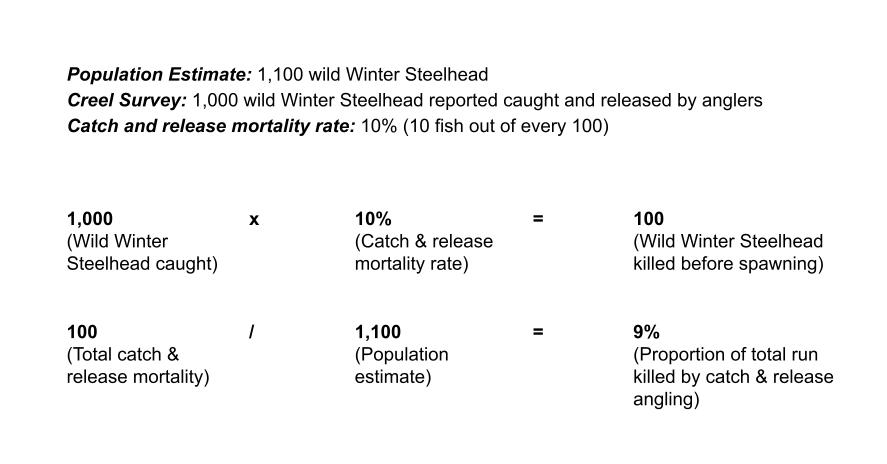 This example shows that without harvesting/killing one wild Winter Steelhead in the sport fishery, anglers are likely killing 10% of the total run. That means approximately 10% of the population is dying before reproducing. In fact, in the Olympic Peninsula, creel surveys show that 140% of the run is being caught in some watersheds. This shows that every fish is being caught one time and some are being caught twice! Damn, we're good at catching fish!

This is not to say we recreational anglers shouldn’t be fishing. It does mean we must be aware and cautious of our impact on whatever populations we encounter. When that impact becomes too great for a population to sustain, as it did in many rivers this past year including the Umpqua, just one basin north of the Rogue River, we must step back. At the same time, some rivers such as the Chetco and the Rogue are receiving more and more angling pressure every year. We are likely catching close to 100% of the fish that are returning to these rivers. Using Washington’s management mortality rate means that catch and release angling is taking 10% of the fish returning to spawn. Add the 15% harvest cap for wild Steelhead angler harvest and we are mining out 25% of the run every year! Converting to just catch and release angling will still have an impact. 10 fish out of every 100 will be killed in the Rogue River catch and release fishery alone. Compare this to the 25 out of every 100 fish that will be removed from the population if wild Steelhead harvest continues as proposed under the plan (again, hatchery Steelhead harvest will still be allowed and this rate doesn't account for mortality from other sources including broodstock collection, predation, and bycatch impacts in commercial fisheries).

If there is one thing I ask you to take from this article, it's that anglers do have an impact on a fishery. No; the answer isn’t to hang it up and walk away. I am an angler myself and lost access to my homewaters of the North Umpqua this summer where the river saw the lowest population of Summer Steelhead ever recorded. It is heartbreaking. It’s in times like this when it would be easier to just turn it in and turn our attention elsewhere. But this is the moment that we, as anglers, need to put our passion for these fish into becoming their greatest advocates, both on and off the water.

The answer is to help folks understand anglers and managers must use caution when managing with so much uncertainty in order to conserve our fisheries. A step in the right direction for the Rogue and south coast would be to eliminate wild Steelhead harvest (kill/harvest of hatchery fish would still be allowed) and proceed with catch and release regulations for wild fish until adequate harvest numbers, population estimates, and harvest rates are available. This will allow everyone to keep fishing while minimizing the impact of angling.

On Thursday, December 16th, ODFW Commissioners will be taking public testimony on the Rogue South Coast Multi-Species Conservation Management Plan. This is the most important moment yet for us to show up as the overwhelming groundswell of anglers and non-anglers alike that want to see the state do the best thing for the future of these fish.

Here are the ways you can join the groundswell:

Working together we will ensure that southwest Oregon has abundant wild fish, free-flowing rivers, and thriving local communities. It is more critical now than ever that we let our voices be heard and continue to grow the true groundswell of public support reviving abundant wild fish!

If you have any questions or concerns please reach out to Native Fish Society Southern Oregon Regional Coordinator Kirk Blaine today at kirk@nativefishsociety.org. Kirk is more than happy to assist with crafting testimony or any advice that may be necessary to help lend your voice to wild native fish.