Story and photos by Adam Bronstein 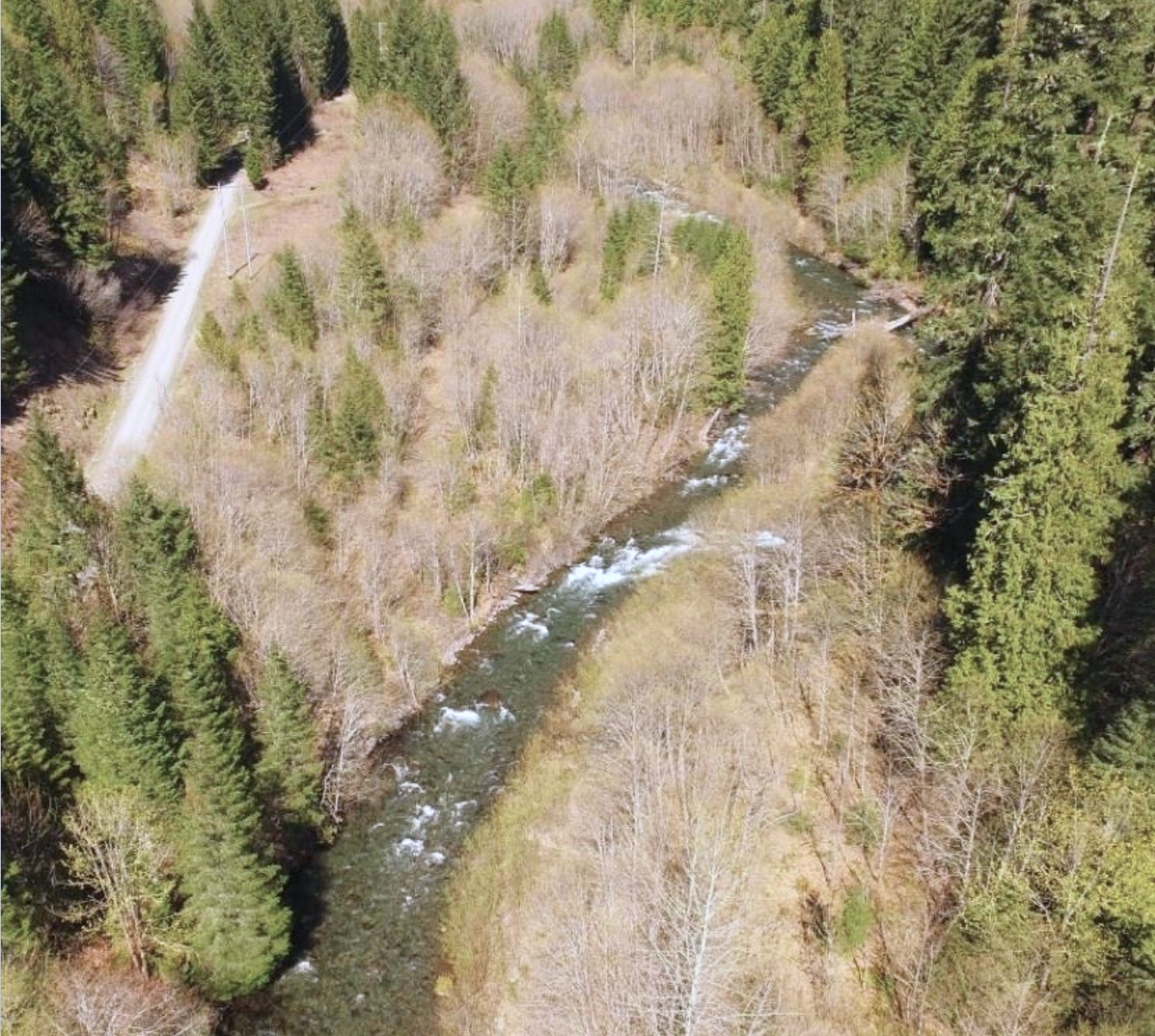 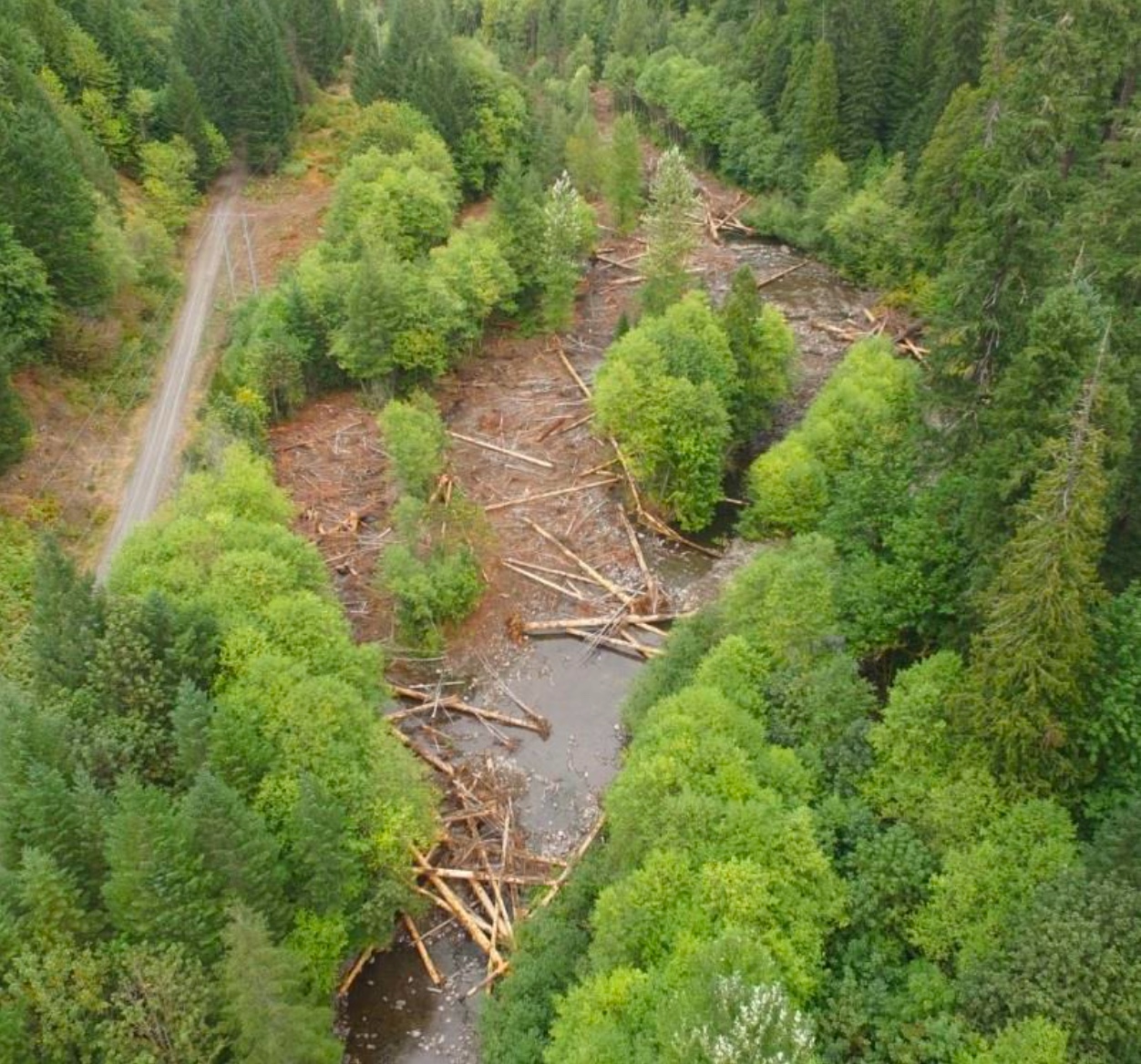 Before and after Deer Creek Restoration- US Forest Service Photo

Beginning at Clear Lake as a series of springs and seeps, the upper McKenzie River tumbles its way down the west side of the Cascades in a raging blue torrent, passing over steep falls and through lava chutes. Its water is crystal clear and runs bone-chilling cold, making it prime cold water refuge for native bull trout and rainbow trout. Along its banks, the life cycles of cedar and Douglas-fir trees have been running their course for millennia, growing to massive size and then falling into the river creating natural log jams and retaining gravels for spawning.

During the heyday of logging in Oregon, many 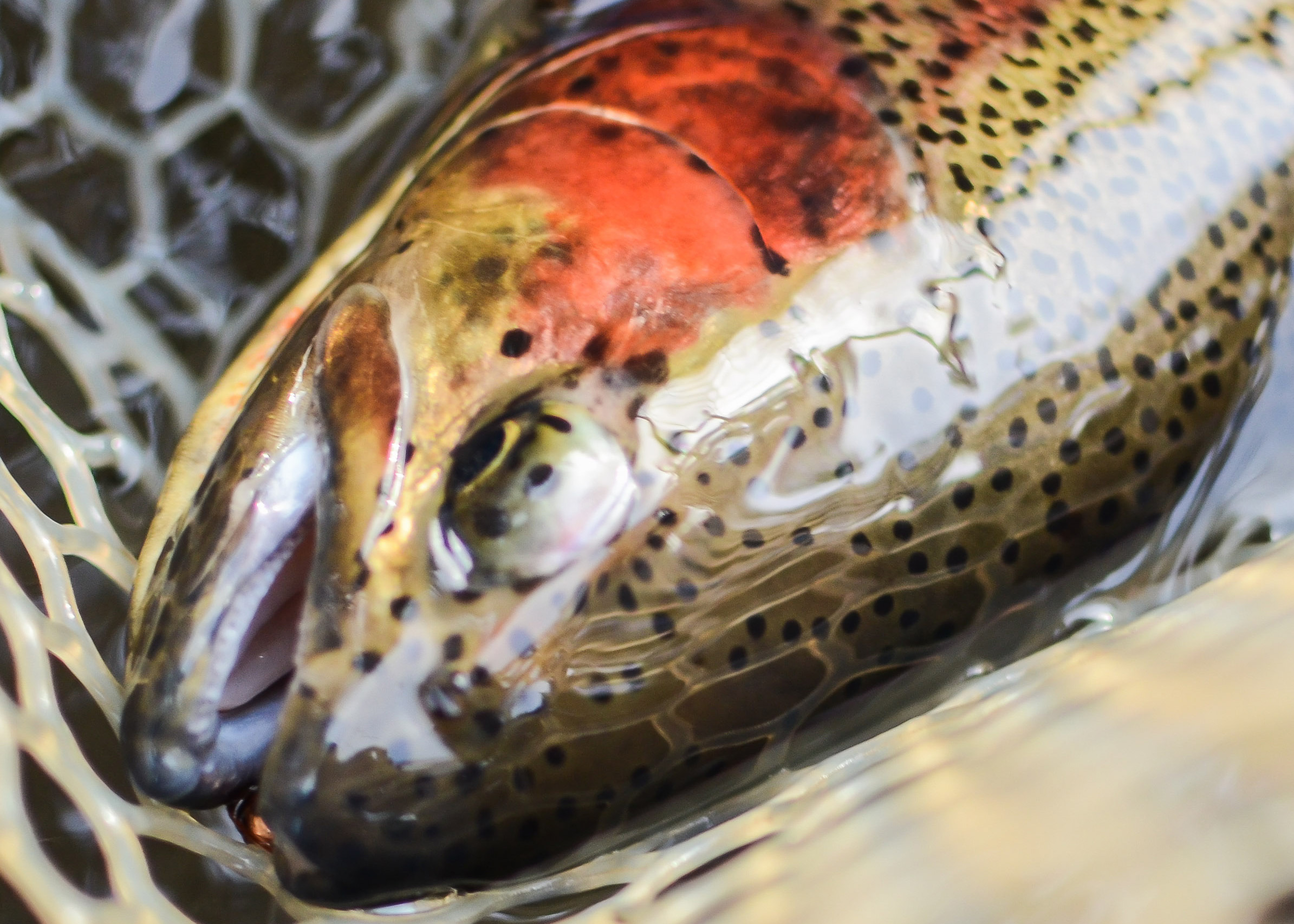 downed trees were removed from the river and its tributary streams, and trees growing along the banks were also logged, cutting off the supply of trees that would naturally fall into the streambed. The complex stream habitat favored by native trout and salmon that had been accumulating here for thousands of years disappeared virtually overnight.

When the old logs were removed, it was never the intent to cause harm to the fish. It was an unintended consequence that has been played out over and over across entire landscapes and regions. Habitat degradation is one of the many reasons why native fish are imperiled, but fortunately, we can take action to restore these habitats and support native fish.

Two years ago, my friend Dan and I were fishing the upper McKenzie enjoying our usual haunts and came across a rather large construction project on a tributary called Deer Creek. We approached a smiling construction worker and asked what was going on. 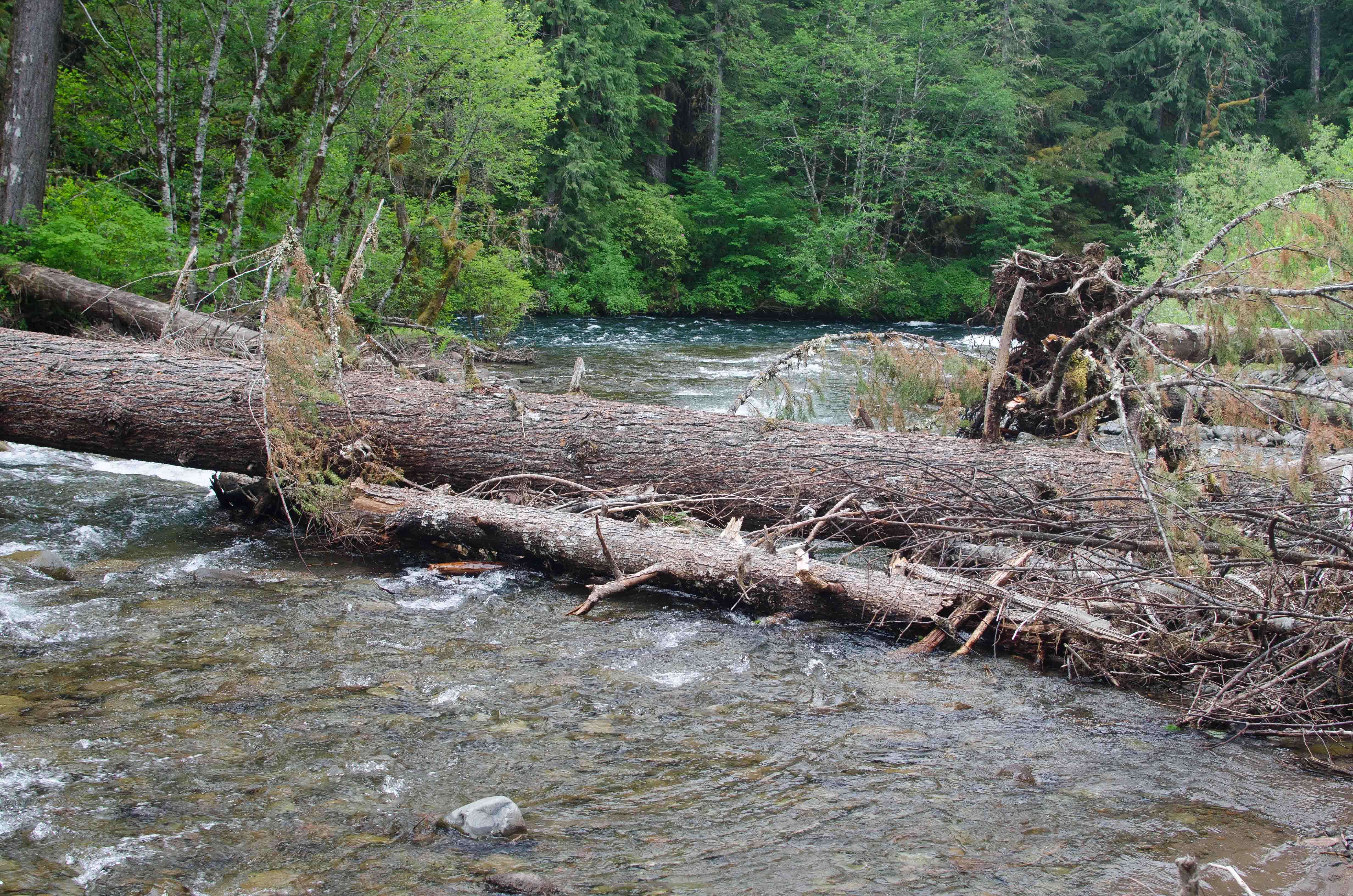 We were excited to learn it was a stream restoration project and asked if we could check it out and they happily obliged. We walked down a skid-steer path to the stream bank and saw excavators placing and piling large trees like magicians throughout the high-water areas and floodplains. A logging crew had been through earlier in the week and felled marked trees as selected by the US Forest Service and the McKenzie Watershed Council, the project sponsors. Wood was gathered for the project by pushing over large trees in upland units about four miles away and brought down to Deer Creek. Another important part of the project was removal of channel-confining berms and use of that sediment to raise the elevation of the incised mainstem channel in order to reconnect historic side channels and floodplain.

The volume of wood placed in the stream was staggering. By resetting and reloading our rivers with wood, we are priming the pump and allowing for new natural wood recruitment to take place and have places for it to jam up. This creates deep pools for cover, slower water for resting and sorted gravels for spawning beds. With projects like the Deer Creek Restoration, we are honoring and supporting native fish by striving to best recreate their optimal habitat.

Important partnerships and regional visions are at work here. As described by Jared Weybright of the McKenzie Watershed Council, “The Deer Creek Restoration Project was initially designed in partnership between the Willamette National Forest and the McKenzie Watershed Council after the completion of an earlier in-stream enhancement project, the Middle McKenzie Side Channel Enhancement Project, which focused on seven McKenzie River side channels between Blue River and Paradise Campground. The design was refined over time and was highly influenced by consultation with the lead hydrologist from Willamette National Forest and a fish biologist and hydrologist from the Deschutes National Forest. The Deschutes National Forest, in collaboration with numerous partners, recently implemented several similar projects on Whychus Creek near Sisters, Oregon. The Deer Creek Project relied heavily upon the lessons learned and experience gained with the projects on Whychus Creek.” 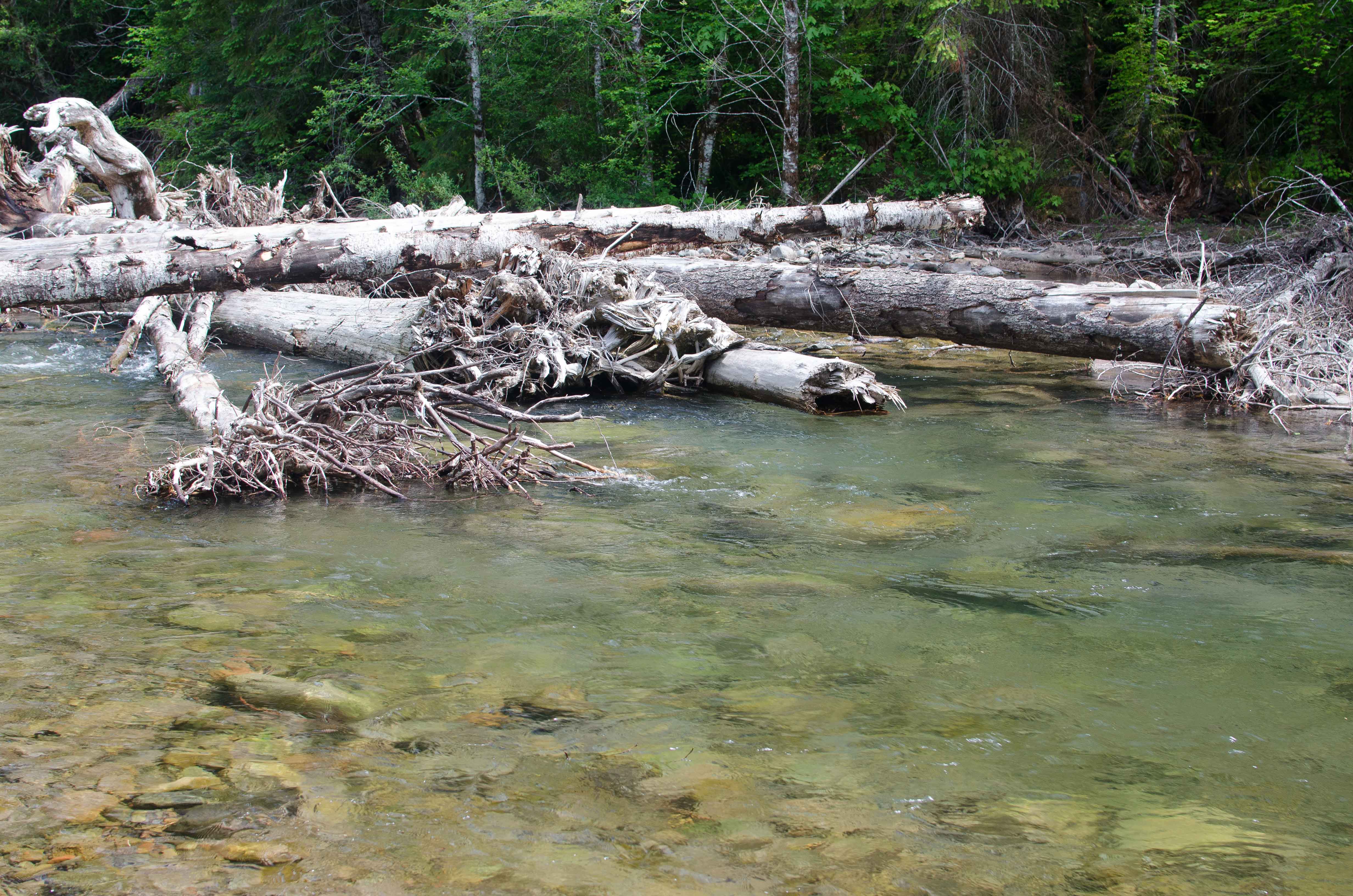 In prior decades, the predominant approach to stream restoration dictated that water forced out of the main channel resulted in an unwanted warming of water and resulted in less habitat for fish. There was little empirical evidence to support this, but nonetheless, it became common practice. Today with greater understanding of ecological function, we now know that water forced back underground will reemerge colder than when it entered. Not to mention, this is how the system functioned naturally before it was logged. Beaver dams were also historically present in much high numbers, which provide many positive benefits to fish.

Reconstructing what the environmental conditions must have been like before settlers inhabited these areas is critical to understand the needs of a species, in the hopes that they can begin to flourish once again. Redband trout hatchery programs have negatively impacted native populations here for many decades and recent efforts by conservations led to the cessation of stocking above the town of Blue River, allowing wild fish to more easily recolonize. Restoration projects such as that on Deer Creek supports and enhances these existing native, wild fish populations. A recent genetics study done in 2010 by US Fish and Wildlife found a distinct Deer Creek population of rainbow trout with very low traces of hatchery genetics, making the restoration project even more significant.

Two weeks had passed and I returned to see the site. The last excavator left and covered their tracks back up to the main road. Beavers were already busy at work plugging smaller holes in the heaps of new log piles placed in the creek. 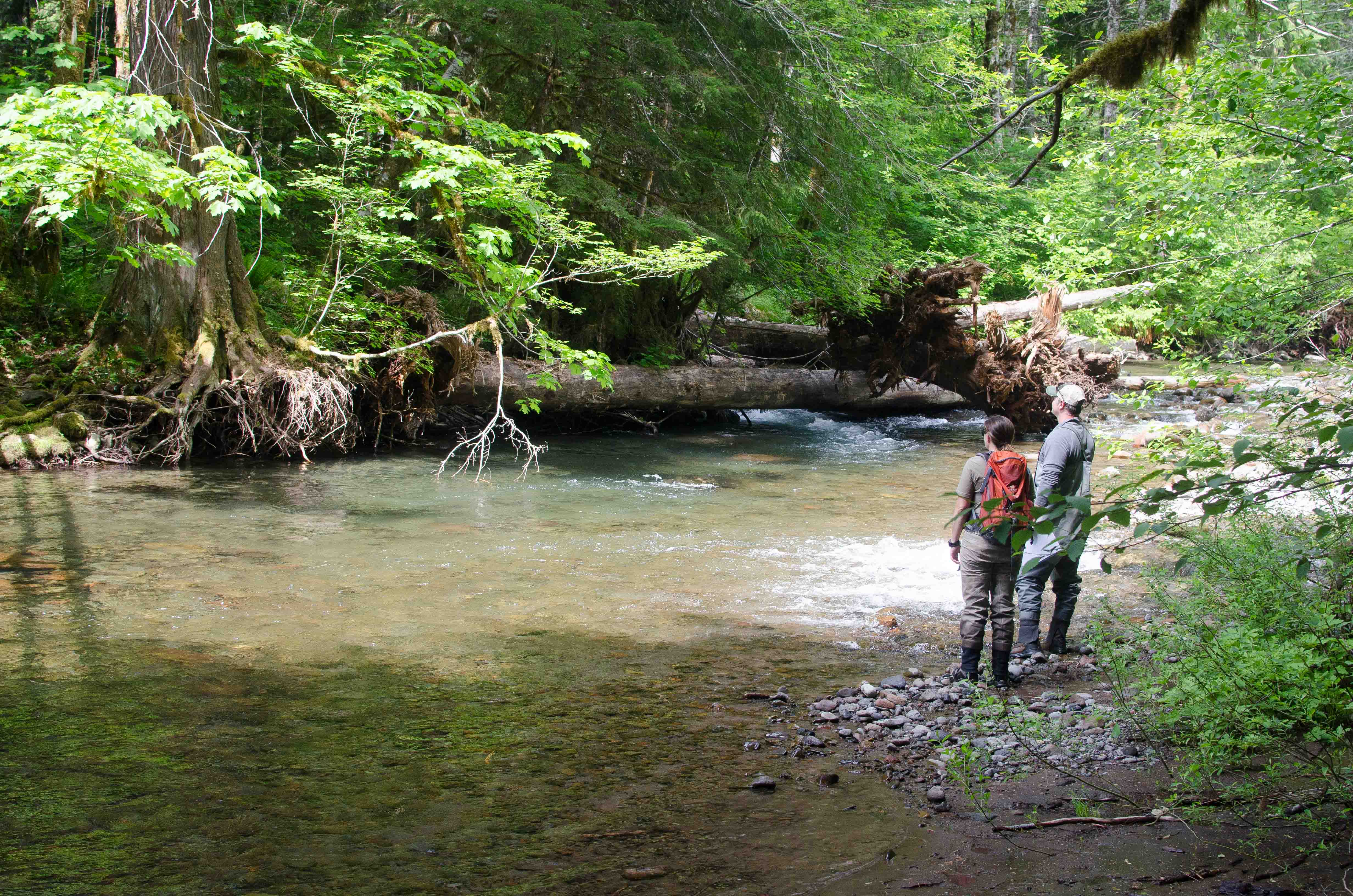 While this process can be “unsightly” to the unappreciative eye, when looking at time-scales and the professional job done by the Forest Service, Watershed Council and machine crew, they have left Deer Creek much better than when they found it. Vegetation will regrow and plants and animals will recolonize. Through disturbance comes rebirth. With so much wood load, it is the hope that this area will now become self-sufficient once again and natural processes will resume their course and native species will find it easier to thrive in these waters.

In 2017, I joined Kate Meyer, Fish Biologist with the Willamette National Forest, along with two biologists from the Mt. Hood National Forest on a full project tour last spring. They exchanged ideas, knowledge and experience. Each project is different and the desire to learn and apply these lessons make future projects even more impactful. The full project length was 1.5 miles, beginning at the mouth where it meets the McKenzie up to a secluded section of old growth forest which provided a “reference reach” (the closest natural example of pre-existing habitat). Short, but important floodplains downstream from the reference reach were reconnected totally about 35 acres.

Restoration projects such as this are happening across the region and often go unnoticed by the general public and media. But these are big stories and should be celebrated. They happen out of the view of most of us, but with a little research or wandering in the woods at an opportune time, we can learn about the people and organizations restoring instream habitat for native fish. Find out what restoration projects are happening in your area by contacting your local Forest Service office, Watershed Council or Land Trust. Get involved and encourage action.

“The Project was developed and managed through and established partnership between the Willamette National Forest (WNF) and the McKenzie Watershed Council (MWC). Funding was provided by the Oregon Watershed Enhancement Board, the National Fish and Wildlife Foundation Bring Back the Natives program and the WNF Title II (federal payments to timber-dependent rural counties) funding.” - Deer Creek Restoration Report 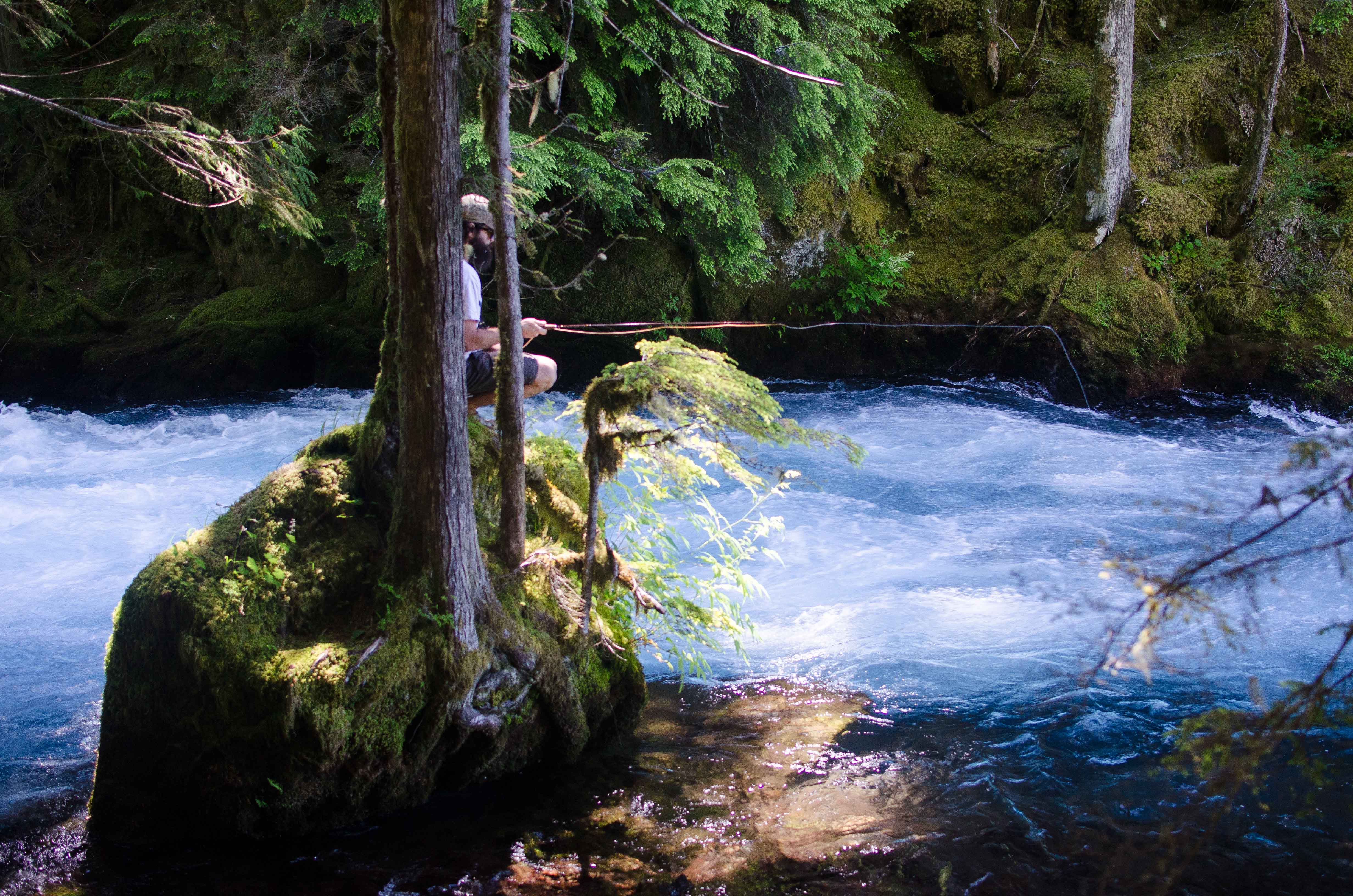