Coho salmon in the Yamhill Watershed
Posted on: February 12, 2018
Donate

Coho salmon in the Yamhill Watershed

Written by Gabi Esparza and Luke Westphal, reprinted by permission

Salmon are an iconic symbol of the Pacific Northwest. Strong and beautiful creatures, they provide a number of services to our ecosystems, economies and communities. They offer sustenance for not only humans, but also orca whales, eagles, herons and bears.

Salmon also bring nutrients into areas of low productivity, allowing for healthy food webs that circulate nourishment to plant and animal species. Their presence in high numbers indicates clean and thriving aquatic, riparian and upland environments. Pacific salmon support thousands of jobs and economies in the fishing industries. For millions of years, the Willamette Valley has supported populations of Pacific salmon, including Coho (Oncorhynchus kisutch) and Chinook (Oncorhynchus tshawytscha). Although they face hardships to survival, a booming population of Coho salmon are now producing naturally in the Upper Willamette River and find particular refuge in the Yamhill River Watershed.

Historically, Coho are not believed to have been able to migrate in significant numbers upstream of Willamette Falls at Oregon City. This is due to a roughly 45-foot drop at the Falls during the seasonal low flows in autumn months when Coho adults return to spawn.

In the 1880s, however, construction and operation of multiple fish ladders allowed adults to successfully pass upstream into the Upper Willamette Valley. No Coho were recorded spawning in the Yamhill River Watershed until the Oregon Department of Fish and Wildlife (ODFW) started the Coho hatchery program in 1954, which ended in 1988. Over the course of three decades, ODFW released tens of millions of hatchery stock Coho into Upper Willamette Valley river systems, including the Yamhill, Molalla, Tualatin, Pudding, and the Middle Fork Willamette. This effort to establish a self-sustaining run of Coho above the Falls was primarily intended to support recreational and commercial fisheries and alleviate depressed ocean and Columbia River fisheries.

Since the end of the stocking program, Coho have continued to reproduce naturally across the Upper Willamette Valley. The population has exploded in recent years, setting historic records, including more than 20,000 Coho returning each year in 2009, 2010, 2013, and 2014. Some Coho, like many found in Agency Creek, are even genetically distinct from the original hatchery stocks planted in the South Yamhill River in the 1960s and 1970s. 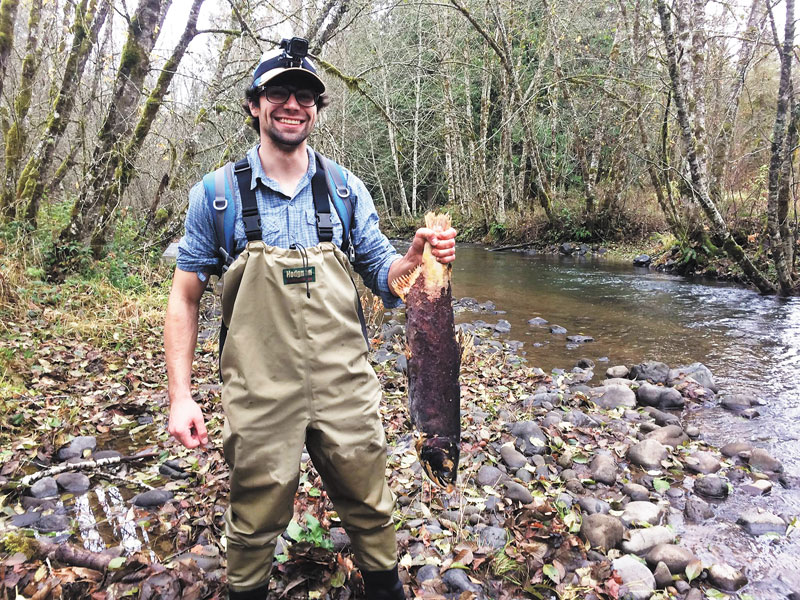 In addition, according to radio-tagging studies, the Yamhill Watershed can potentially receive more than 45 percent of all Coho migrating upstream of the Falls every year. The local run is large enough to support an active sport fishery from August 1 to October 31 on the Yamhill River from its mouth at the Willamette to the confluence of North and South Forks of Yamhill River, as well as on the South Yamhill to the mouth of Rock Creek near Grand Ronde.

From August to December, wild Coho salmon travel around 150 miles upstream from the Pacific Ocean to spawn in their natal streams of the Yamhill River Watershed. This makes them anadromous, which means they spend their lives in the ocean, but migrate to spawn in freshwater. Although the precise mechanism is unknown, it is hypothesized that salmon find their natal streams through chemical cues and other evolutionary instincts.

Adult Coho differ in appearance from other salmon. They usually have lighter pigment on their lower jaw, small black spots on their back and blue-green silver sides when in the ocean. When they return from the ocean, Coho go through physiological transformations to adapt to the freshwater environment, a process called smoltification. Coho change from bright silver to a reddish-brown. They stop eating and draw energy from their fat and muscle reservoirs.

In freshwater, the males (bucks) develop large teeth and a double hooked nose, or a kype, attributes which they use to compete for dominance during mating season. The females (hens) use their tails to dig into the streambed gravels to lay their egg nests, or redds, which the buck will then fertilize. The redd can be identified by a slightly depressed gravel area (about 2-3 square feet in size, in a half-inch to three-inch diameter gravels) clear of algae and visibly cleaner than the surrounding gravel. The spawning pair will guard the nest until their death and their carcasses will provide sustenance for different species. The nest eggs incubate over late fall and winter, then emerge between January and April. Juveniles mature for at least one year before migrating to the sea in April to June, then lose their camouflaging parr marks to resemble ocean Coho. Coho age about two years in the ocean before they return again to freshwater.

This astonishing lifecycle of a Coho has its obstacles. Of the roughly 1,500 eggs laid in each redd, only a handful survive to adulthood. Coho thrive in streams with cold water (about 48 to 59 degrees Fahrenheit), gravels where adults can lay their eggs, and pools with an abundance of wood and cover, where juveniles can find shelter and food.

Landowners with streamside property can take a number of steps to improve habitat for spawning and rearing. Repairing or replacing stream crossing culverts that have outlet drops can allow adults to access upstream to find the best suitable nesting gravel for redds and juveniles may move freely as they migrate, searching for food, cover and cold water. Habitat can be enhanced by controlling invasive weeds and planting trees and shrubs along the stream. The placement of large downed trees and root wads in the channel can also improve fish habitat by slowing flows, allowing for deposition of spawning gravels, creation of rearing pools and re-connection of the floodplain.

Community members and landowners can always support local Coho by gathering information to better understand their spawning grounds. Since 2012, the Greater Yamhill Watershed Council (GYWC) has taken youths and adults on creek walks in October through December to document where Coho salmon are spawning and to provide first-hand experiences with these amazing wild salmon. During the hikes, we walk in the stream channel wearing chest waders, using a GPS to record sightings of live fish, carcasses and redds. We also note quality fish habitat features including large wood and ideal spawning gravels in the channel.

Working in partnership with a diversity of landowners who have graciously provided access to the creeks, we have documented Coho in almost every major tributary in the Yamhill Watershed, including Deer Creek, Mill Creek, Willamina Creek, the North Yamhill River and its feeder creeks (Baker, Panther, Turner and more), and the Upper South Yamhill River and its tributaries (Agency, Gold, Rock, Rogue, Rowel and more). The data collected helps us better focus on outreach programs, providing assistance to landowners interested in pursuing grants and resources for improving fish habitat along their creeks and rivers. We hope this effort will empower our community to be stewards of our local fish populations and develop an even greater sense of pride for this beautiful watershed.

We would love for you to be part of our flourishing salmon strongholds. If you would like to spend a day hiking a creek to look for Coho or have made any observations of your own, please feel free to contact River Steward Andrew Chione.