During the heat of the summer, anglers, campers, hikers, and other outdoor recreation enthusiasts spend time around rivers to cool off and enjoy the natural beauty. Our waterways provide refuges from the summer heat, scenic settings for camping and swimming, and homes for the fish that we love to pursue.

An important part of minimizing our impact to rivers and streams is by leaving no trace. On family camping trips, a popular pastime is the construction of rock dams in streams. Rock dams can hold back water to create a pool to swim in, serve as a cooler for beverages, or simply be a fun family project.After the weekend camping excursion or day on the water, these seemingly harmless structures are often left for the next group to enjoy and build upon.

How do rock dams affect fish? In the summer months, water levels drop and water temperatures rise. Fish that need cold water to survive often head upstream to find thermal refuge from the summer heat. This includes trout and juvenile salmon. This seasonal movement of fish is even more important during drought years, which are frequent in the American west. Rock dams that span the stream channel impose an obstacle that is often impassable. The challenge is not limited to fish that dwell in the stream year-round. Migratory fish that swim upstream in the summer to spawn in the fall, including spring chinook salmon, summer steelhead, and bull trout, can be blocked by recreational rock dams. Have you ever seen photos of salmon leaping small waterfalls to reach their spawning grounds? A deep pool below a waterfall or log enables fish to make a swimming jump over obstacles in their path. Rock dams are usually built in shallow water, where fish cannot always gain enough momentum to jump over them. 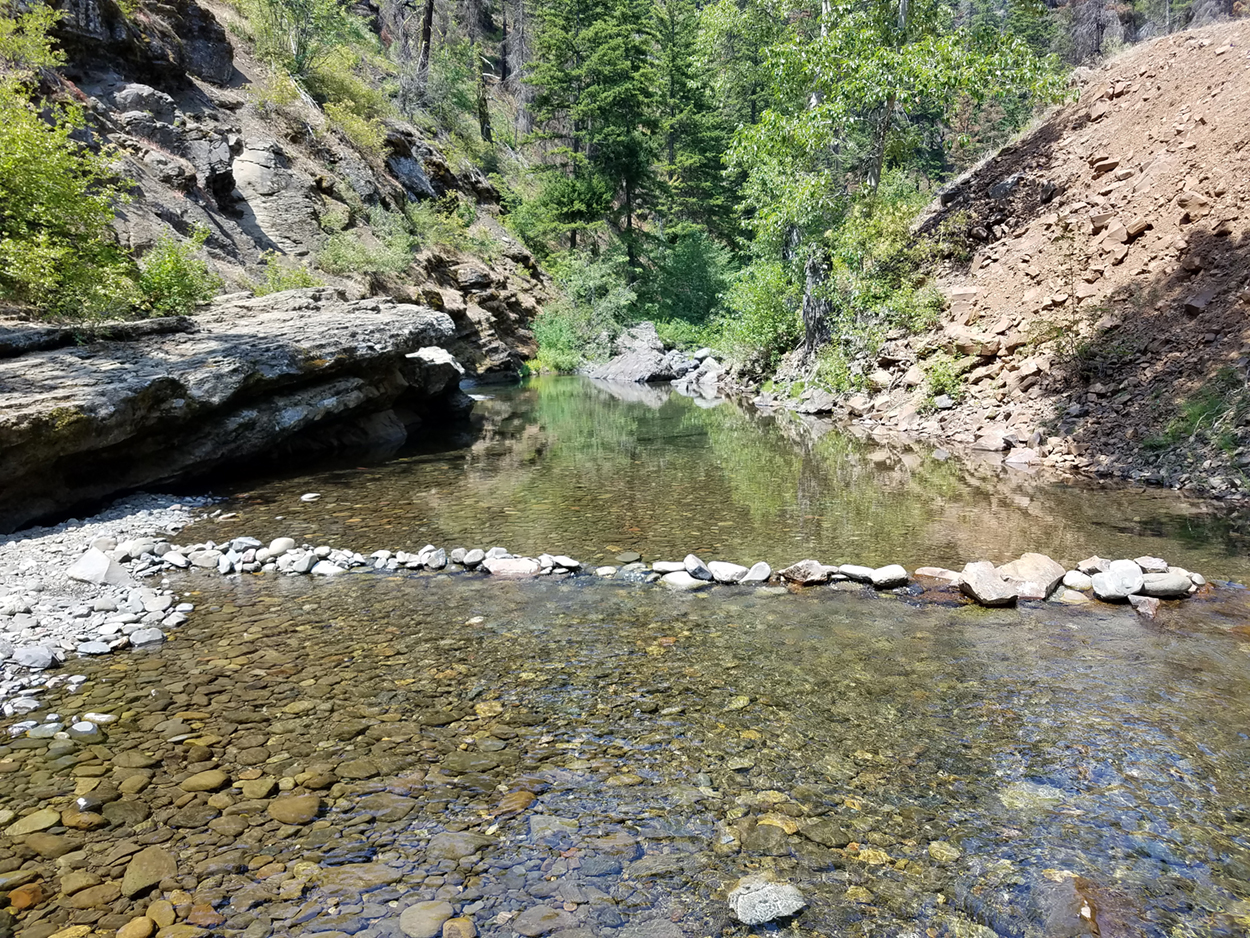 Half-circle shaped dams along the shoreline can also have dire consequences for fish. As water levels drop in the summer, juvenile fish can be trapped in them. Then, they are vulnerable to predators or succumb to heat as the trapped water warms up. Just last week, I rescued some fish trapped in a bank-side pool created by a recreational rock dam. How? By kicking it down, of course!

As outdoor recreation enthusiasts, we are stewards of the landscapes we derive enjoyment and well-being from. The next time you see a recreational rock dam in a stream this summer, you can do the fish a favor by knocking it down. Not building rock dams when you are spending time on the water helps the creatures that still need to live there after you leave. If you observe others building a rock dam, inform them about how rock dams harm fish and ask them to knock it down when they are done enjoying it. If you know of a spot where rock dams are frequently built that look like they may pose a challenge to fish passage, contact your state fish and wildlife agency and, if on public land, the state or federal agency that manages the land.

Mid-Columbia Fisheries Enhancement Group, a non-for-profit organization based in Ellensburg has spearheaded the effort to tackle rock dams in Central Washington. Their mission is to protect and restore salmonid populations and habitat. Summer interns and seasonal employees patrol streams in the Yakima River Basin during the summer months, knocking down recreational dams and providing public education on the topic. Campground presentations with family activities inform people about the aquatic species in the area, the problem with rock dams, and what they can do to be stewards of our streams. These efforts benefit bull trout and spring Chinook in the Yakima Basin, as well as a host of other native fish.

I hope you enjoy your time on the water this summer. Knock down those rock dams and spread the word!