Andy Marx, a wild fish advocate, and I spoke for months about the Shasta River, its importance as a wild Klamath fish stronghold and its water quantity and quality challenges. Andy has cared for his community and its natural resources for years as both a public defender and fishing guide. Andy’s excitement over becoming a Native Fish River Steward for the Shasta and my desire to see first hand the watershed he calls his homewaters finally boiled into a face to face day on the Shasta River.

I was excited to spend a day exploring the waters of Northern California. On a beautiful, cold crisp morning in early December we met on the banks of the Klamath River and began our journey at the Shasta-Klamath confluence. Shadowed by gorgeous steep canyon walls with rocky ledges, the Shasta River is a beautiful meandering watershed filled with Fall Chinook, Coho, and wild Summer Steelhead. I was struck by the arid high desert environment and how water quality and quantity, especially in the face of climate change, could be an issue for the river and its fish.

After a brief introduction to the Siskiyou region of Northern California, Andy and I hiked into the Shasta River canyon. California Department of Fish and Wildlife (CDFW) had a large weir installed to count fish and monitor the fishery. The weir consisted of large pipes similar to those on a jail cell that block passage for adult fish traveling upstream. A small gap in the bars allow volitional fish passage and video counting. A fish trap on the upstream side of the passage allows genetic sampling before the fish resume their upstream journey to the spawning grounds. Above the weir, we marveled at a few late Fall Chinook, the tail end of a migration that in good years exceeds 20,000 spawners, guarding their redds. 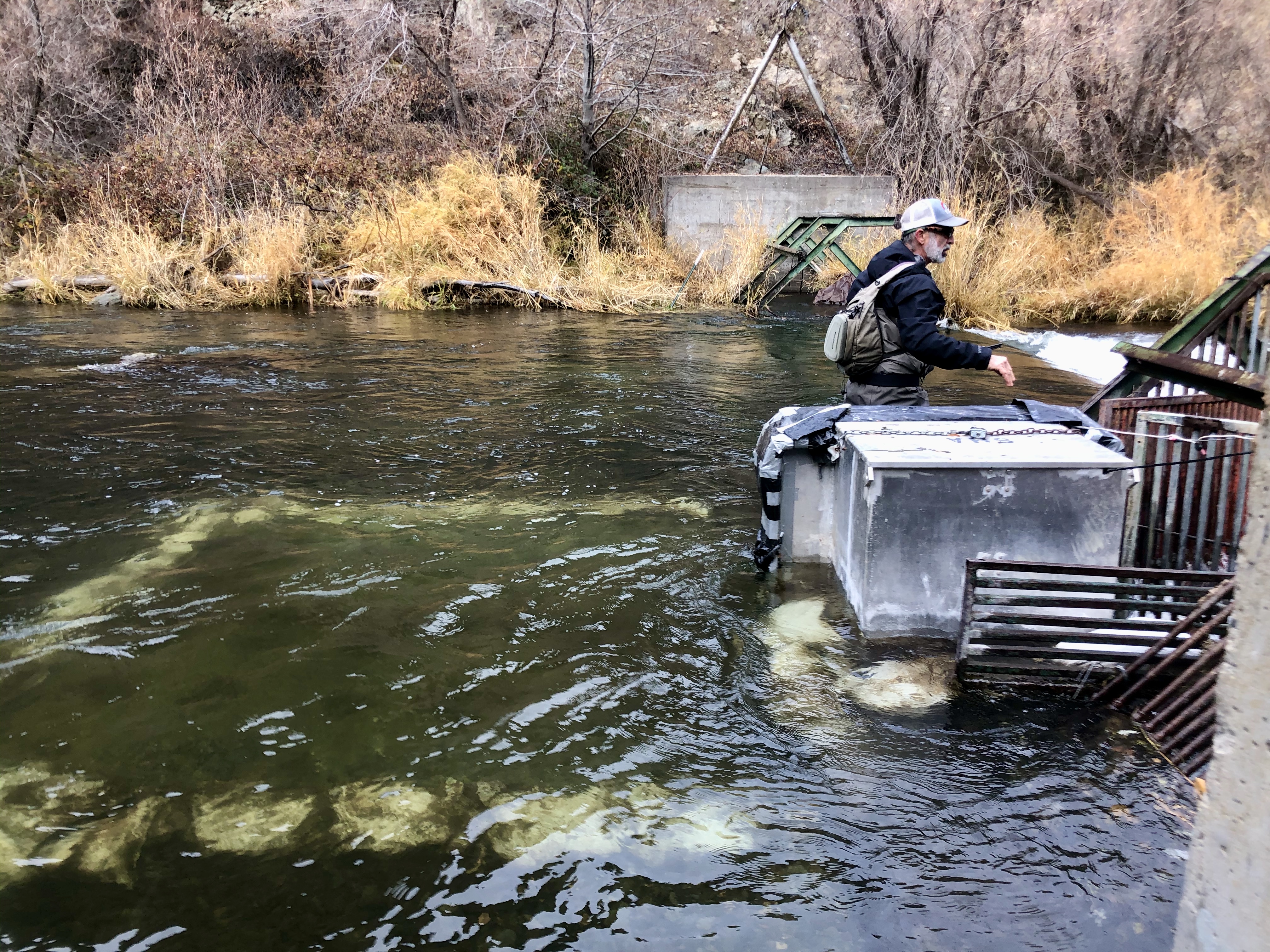 Andy walks around the fish passage at the Shasta River weir. The silver box contains video monitoring of the fishery and the white sandbags outline the fish trap when utilizing it for genetically testing fish.

During our visit, CDFW personnel at the weir were busy checking video and dissecting a spawned out adult Coho Salmon for its otolith, a bony structure that tells the fish’s story including the time they spent growing up in natal spawning grounds and when they left saltwater for their final pilgrimage. Andy, with a hint of sadness, told me only 20 Coho had returned so far this season.

After the weir, Andy and I continued upstream through the Shasta River Valley. I saw the basin’s agricultural demands as we drove through thousands of acres of farmland and livestock production. I pondered the hot summer months when farmers and ranchers likely pump water from every available source to nourish their pastures and crops. I wondered how much Shasta water was left for the adult and juvenile wild native fish considering the farmers’ and ranchers’ livelihoods are sustained by the same water. Competition for scarce water is a true dilemma that has plagued the Klamath Basin since the beginning of the gold rush.

We crossed the Shasta River just outside of the small town of Montague. Andy explained the current flow, around 140 cubic feet per second, was normal for this time of year and represented the base spring flows that once made the Shasta the most productive fish habitat of all Klamath tributaries. Andy described how, during peak irrigation season, the flows crash to a mere ten cubic feet per second, a massive threat to juvenile Salmon and Steelhead that once enjoyed year-round cold Shasta River water.

The common denominator for the entire Klamath basin, in terms of water to sustain wild fish survival, was water diversion and agricultural land-use practices. Overgrazing and irrigation practices cause extreme hardship on the quality and quantity of the Shasta River. Once a pristine watershed, Andy described how the Shasta River was classified as impaired under the Clean Water Act. There has been little measurable improvement to water quality since the initial listing over two decades ago despite numerous studies and plans.

We drove 30 miles up the Shasta River to an area called Big Springs that has seen much attention and some positive improvement in recent years. We stopped at a major spring that fills Big Springs Lake and crossed over another source, Little Springs Creek, onto a ranch. Andy explained how, after the Nature Conservancy established conservation easements and flow was dedicated to remain instream, the ranch is being transformed into state wildlife refuge. The riparian areas, fenced to stop streamside grazing, were lush with vegetation. Andy pointed out a large project underway aimed at eliminating an upstream diversion that blocks fish migration. The project benefited the adjacent ranch by installing large irrigation pipes in lieu of a water wasting and difficult to clean ditch system. 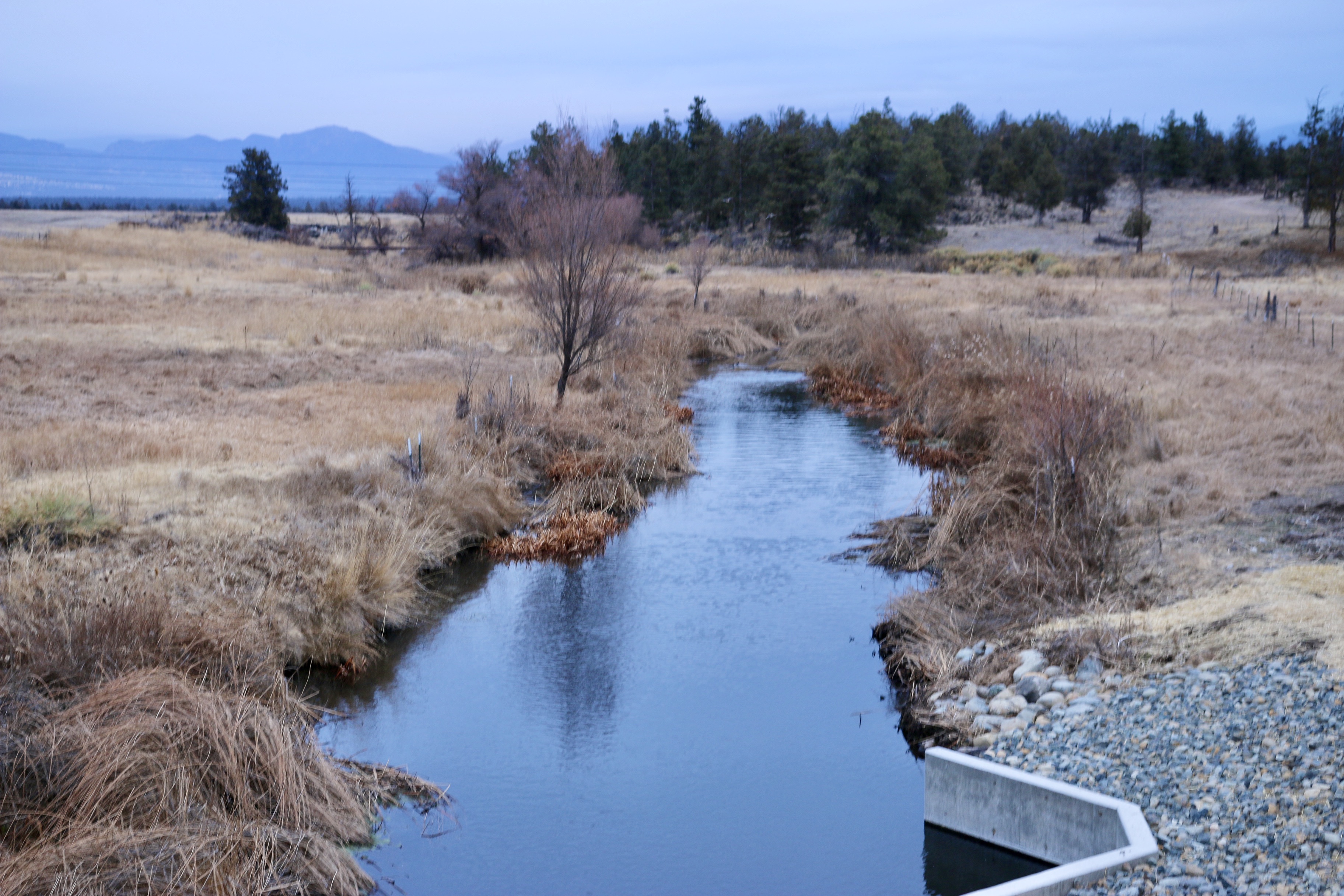 Pictured here is a small portion of the wildlife refuge owned by the Nature Conservancy.

We continued our journey to another nearby ranch where Andy pointed out several other spring sources. At Parks Creek, a snowmelt and spring fed Shasta River tributary, Andy described his desire to focus on Parks Creek’s numerous spring sources, that once served as Coho and Steelhead rearing strongholds, in the quest to restore the Shasta’s wild fish habitat. The effects of agriculture were obvious in Parks Creek where I saw overgrazed banks and stock panels (large fencing) submerged in the streambed.

I also was shocked to learn a dam not far above the Parks Creek confluence that creates Lake Shastina provides no fish passage and eliminates all up or downstream fish migration. The waters above this barrier once provided clean clear water for spawning and rearing of Coho, Fall and Spring Chinook, and summer Steelhead. When the dam was built to irrigate Shasta River farms and ranches there was no concern for fish passage and Spring Chinook did not survive. Andy told me how the dam represents a double edged sword; it stops access to cold spring sources above the dam and, because it collects, warms and diverts all the water from above, the trickle outflow harms the cold spring water supply.

My visit with Andy, a gracious River Steward excited and passionate about his homewaters potential for wild abundance, was one for the books. The Shasta River faces some unique challenges related to water quality and quantity, Andy has the energy and expertise to face those challenges. I am excited to support his efforts now and into the future to restore the resilient Shasta River for both the community and Klamath Basin wild native fish. 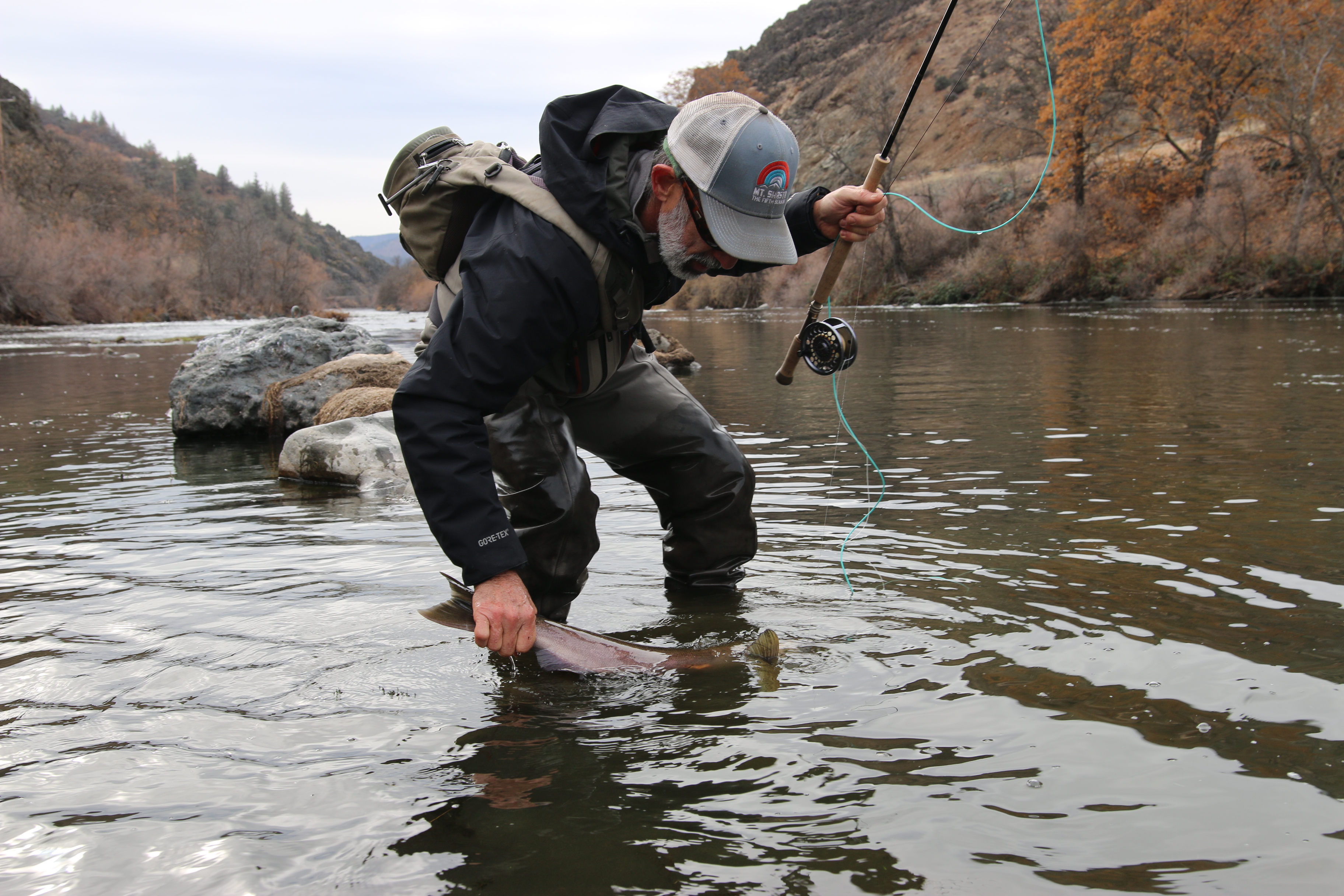 While visiting, Andy landed this beautiful Coho Salmon. The fly was quickly removed and the fish returned to its natal spawning grounds.