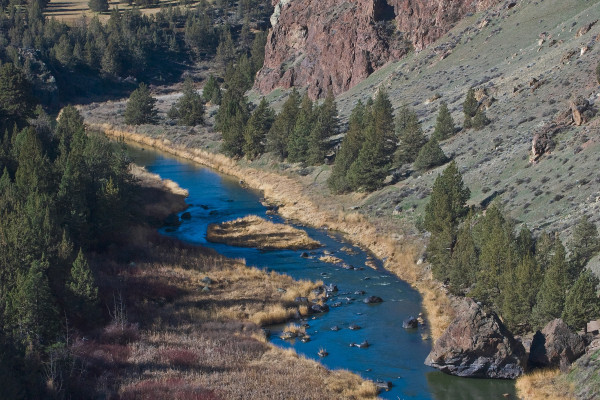 Send us a message about the Crooked River

A Long, Hot Summer for the Deschutes

It has been a hard year for the Deschutes River and its native fish. Below average snowpack in the higher elevations followed by an early, hot, and long summer drove water temperatures into lethal...

The Crooked River has three major headwater tributaries, the North Fork, South Fork, and Beaver Creek which join to make the mainstem as it flows through Paulina Valley. Further down, Bowman Dam, creates Prineville Reservoir. Below Bowman, eight miles of the river are designated Wild and Scenic as it traverses a steep desert canyon. In Prineville it is joined by Ochoco Creek, soon to collect McKay Creek and several smaller tributaries. It empties into Lake Billy Chinook, a large impoundment on the Deschutes created by Round Butte Dam. This dam inundates nine miles of historic river channel.

The Crooked River and its tributaries were once a major spawning ground for anadromous fish such as spring Chinook Salmon, Steelhead trout, and Pacific lamprey. Non-migratory fish such as Redband trout and Bull trout, as well as various non-game fish were also abundant. Fish populations began to drop in the early 19th century due to irrigation withdrawals.

The Cove Power Plant on the lower Crooked River, built around 1910, effectively blocked upriver migration of spring Chinook salmon during low stream flow conditions. In addition, Ochoco Dam, built in 1920 on Ochoco Creek, blocked fish passage completely. Round Butte Dam, built in the 1950s on the Deschutes River below the Crooked River confluence, included fish passage facilities. Attempts to pass anadromous fish failed by the late 1960s, thus blocking migratory fish, such as salmon, from historic spawning and rearing habitat in the Crooked River basin. Redband trout are the only native game fish left in the Crooked River basin. There are efforts currently underway to reestablish fish passage at the dam. Some hatchery fish have been introduced in an attempt to mitigate the losses.

At one time, the Crooked and its tributaries provided major spawning habitat for anadromous species such as spring Chinook salmon, steelhead, and Pacific lamprey. Native redband trout and bull trout inhabited much of the river as well. Recently, reintroduction efforts of Chinook salmon and steelhead have begun on the Crooked River and other sub-basins of the Deschutes River. Their survival and success of this program is contingent on proper fish passage at Opal Springs, Ochoco, and Bowman Dams which block any upriver migration to historic spawning grounds.

The removal of Stearns Dam in October 2013 opened up more than 10 miles of spawning habitat to steelhead, salmon and redband trout. This project was the culmination of 10 years of work from a team of multi-agency personnel and stakeholders of the Crooked River watershed. Here’s a video by the Crooked River Watershed Council on the removal of Stearns Dam, which now allows access for native fish to waters not available since the dam was constructed in 1911.