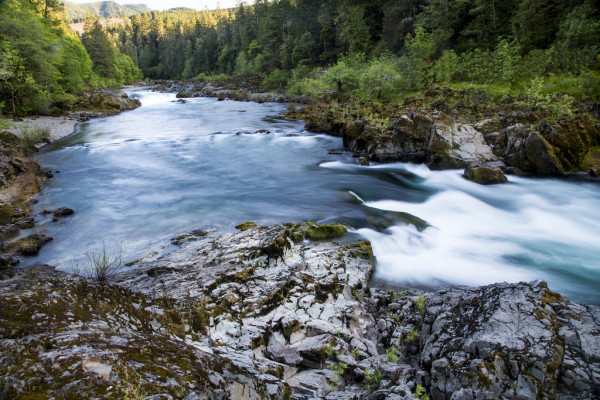 Send us a message about the North Umpqua River

The North Umpqua River is one of the most fabled rivers in the Northwest. It rises in the high Cascades and follows a serpentine course down from the Cascades, westward along the southern side of the Calapooya Mountains. Its upper course passes through the Umpqua National Forest, past Toketee Falls and Steamboat, where it receives Steamboat Creek from the north. Its famous emerald waters are a result of the fact the river source is high enough in the Cascades to derive from snowmelt during the entire year. The melting snow is trapped in volcanic soil and pumice and released during the summer months, providing an even cool-temperature flow. During the summer the flow of the river is approximately 20 times that of the nearby South Umpqua.

Famous for its 33 miles of fly fishing only and its wild summer steelhead, it also has good runs of spring and fall chinook, coho, and winter steelhead. Historically, however, the anadromous fish of the North Umpqua were very numerous, but today the numbers are fewer, but still vigorous and relatively stable. Winter steelhead of over 20 lbs are not unusual.

The upper 35 miles of the North have been included in the Wild and Scenic River system. The Forest Service is better managing the upper river, but BLM still pursues bad management practices and the Oregon Department of Fish and Wildlife’s hatchery programs threaten the genetic versatility and strength of the North Umpqua’s wild fish. Partnerships between different organizations on this river, including the Native Fish Society, Umpqua Watersheds, and Steamboaters, have been crucial in nurturing and protecting this famous river.

A long-anticipated event had hydro scientists high-fiving along the North Umpqua River July 22. Video cameras caught the first Pacific lamprey to pass upstream through the fish ladder on the Soda...