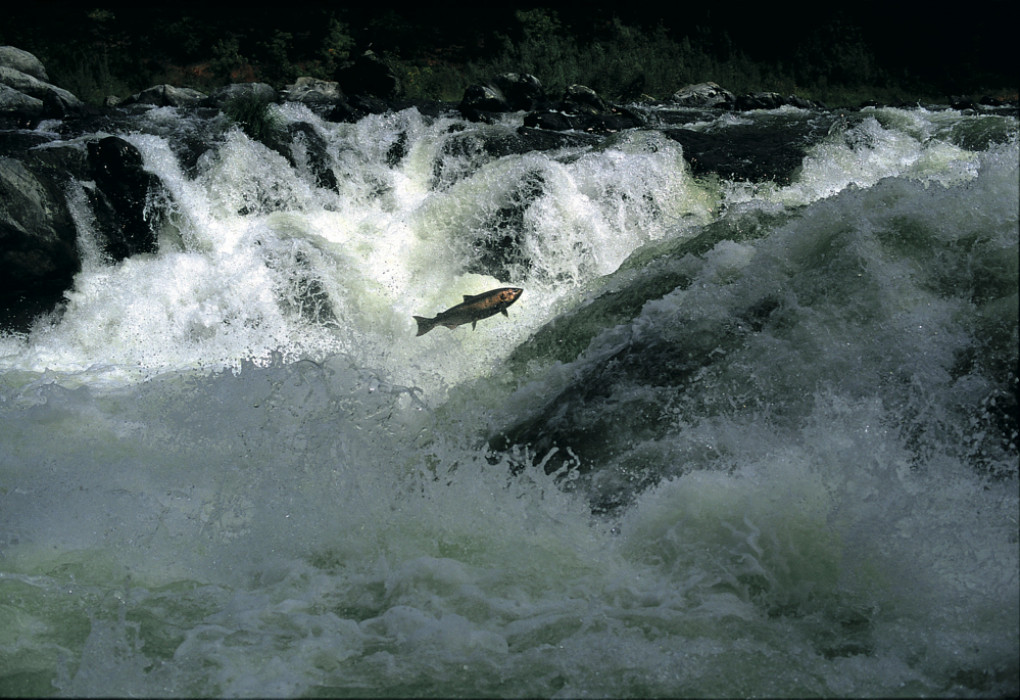 When a dam is removed from a river, thereby making new habitat available for Chinook salmon, will it be possible to restore the salmon population to include both early run (spring) and late run (fall) fish? This is an important question for all rivers facing changes in fish populations that are presumed to have happened as a result of human intervention, i.e., construction of dams that may now be removed. If an effort is made to restore fish populations to include variants that were present historically, what fish should be introduced?

There is a genetic difference between early run (spring) and late run (fall) Chinook salmon that appears to be correlated with early vs late migration. In other words, there do not seem to be multiple reasons for a fish to be an early or late migrator, but just one.

This difference is detected by a sequence associated with the GREB1L gene. The function of this gene is not understood, nor is it clear that this actual gene is responsible for the difference in migration of spring and fall salmon. This is a “genetic marker” that detects this difference.

Most animals have chromosomes that match up as pairs, one from mom and one from dad. Thus, one copy of a gene comes from mom, and the other from dad. These are called “alleles”. Alleles can have identical DNA sequences, or can have different sequences. The differences in DNA sequence may cause differences in functionality in the gene. When the alleles are identical, the animal is called a homozygote for the gene; when they are different, the animal is called a heterozygote.

Heterozygote early run/late run Chinook are “summer run” fish, in between early run and late run fish. It is not clear, though, whether these fish can reproduce normally or at all in the river.

The Klamath as an example:

The authors also asked if this “loss” of the early run allele is happening in other rivers, and found a similar result in the Scott River.

So what fish to use to repopulate the early run Chinook?

Because there just seems to be one difference, i.e., one mutation in the evolution of early run and late run Chinook from one common ancestor fish, it is unlikely that this mutation event and selection for this mutant can happen again in the foreseeable future. What exactly the DNA sequence is that causes this difference in migration in these fish is not known, nor the function of the gene, nor the selection in nature that favored the fish that carried the early run allele. In other words, we cannot wait “for nature to take its course” for early run Chinook to evolve from late run Chinook. If we want more early run Chinook in the rivers, we need to find another way.

Why not use early run/late run heterozygote fish to repopulate?

Will removal of dams also remove the selection against early run and heterozygote Chinook?

How can we tell what would work?

Without more information about the viability of heterozygotes in nature, about the function of the GREB1L gene or some other gene that determines early versus late migration, or about what the selection pressure actually is in the river, we can’t tell. Introduction of early run Chinook or early run/late run heterozygote Chinook into a river under restoration after dam removal is an experiment that with current tools, such as the genetic analyses used by these authors, could allow a real time evaluation of the effectiveness of repopulation, and that would have applicability over a wide range of diverse rivers.