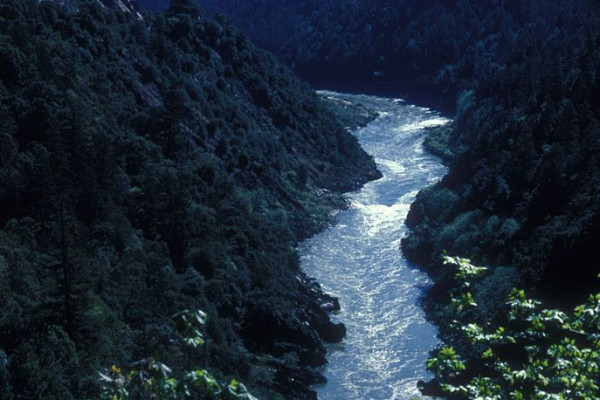 Send us a message about the Klamath River

With it's headwaters in Oregon, the Klamath River flows 263 miles down into California before emptying into the Pacific Ocean near Requa, California. Draining almost 16,000 square miles, it is the second largest watershed in California and covers a diverse terrain including the arid country of south-central Oregon to the temperate rainforest of the Pacific coast. Unlike most rivers, the Klamath begins in the plains and flows toward the mountains - carving its way through the rugged Cascade Range and Klamath Mountains.

The Klamath is the most important coastal river south of the Columbia for anadromous fish migration. Its salmon, steelhead and rainbow trout have adapted to unusually high water temperatures and acidity levels relative to other rivers in the Pacific Northwest. However, dams and diversions in the upper basin have caused water quality issues on the lower half of the Klamath.

After years of political gridlock, the Klamath is now slated to be the largest dam removal project in U.S. history. An agreement between both California and Oregon governors, several other state, federal, power, irrigator and environmental officials have now signed the Klamath Hydroelectric Settlement Agreement, which proposes to remove four dams owned by PacificCorp by 2020.

Following the Steelhead - Through Northern California

I spent the summer and fall of 2020 and 2021 meandering across the rivers and creek of Northern California, looking for juvenile O. mykiss. I swam, walked, minked (slithering over rocks and jumping...