After nearly a decade’s worth of missed deadlines, postponed actions, and poor communications from Federal Agencies, a coalition of conservation groups filed suit on March 13 against the U.S. Army Corps of Engineers (Corps) and National Marine Fisheries Service (NMFS) for their failure to protect and recover threatened Upper Willamette River Chinook salmon and winter steelhead.

Native Fish Society, Northwest Environmental Defense Center, and WildEarth Guardians, represented by attorneys at Advocates for the West, filed suit on Tuesday in Portland. Both the Corps, which operates dams on the Willamette River, and NMFS, which oversees recovery of salmon and steelhead, are named as defendants. Given the Corps’ failure to implement many of the measures required by the original Biological Opinion issued by NMFS in 2008, and new information indicating that Upper Willamette River Chinook and steelhead are now at even greater risk of extinction, the groups ask that the court compel the agencies to act with increased urgency and to reinitiate consultation under the Endangered Species Act. Without change, and soon, the Willamette’s iconic Chinook salmon and winter steelhead will be lost.

Historically, around 325,000 Chinook and 220,000 steelhead skillfully made their way up Willamette Falls to spawn in the upper river basins. Last year, only 822 winter steelhead and an estimated 5,880 wild Chinook returned to the Willamette River - 99 percent less than historical numbers. These fish should be on a trajectory for recovery, rather then decline, since they have been listed as threatened under the Endangered Species Act (ESA) since 1999. 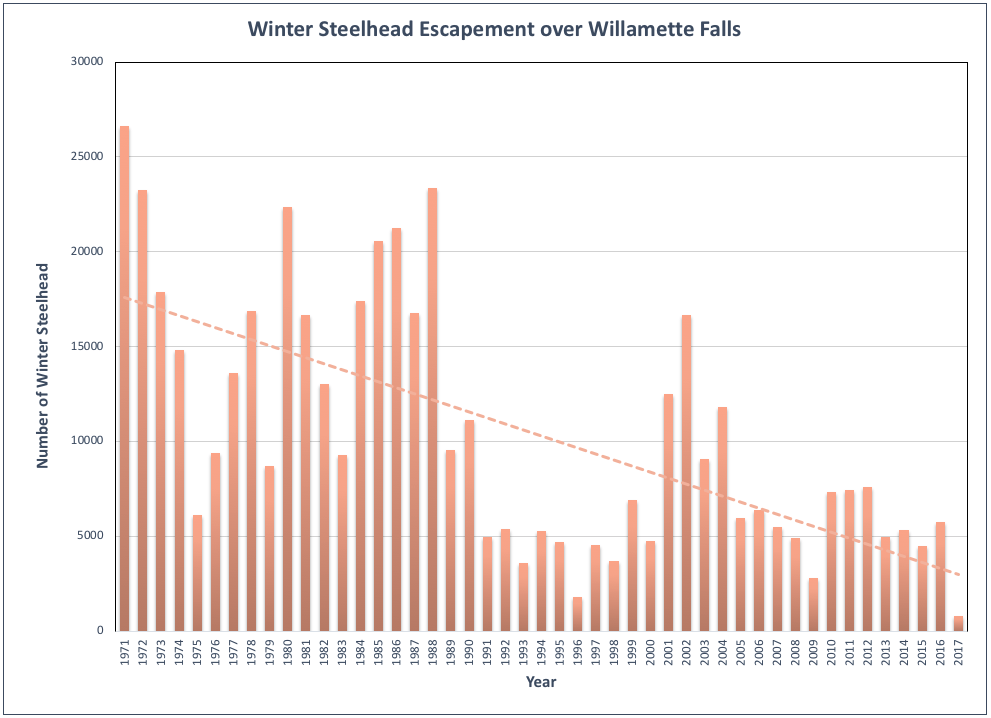 “Everyone in the Northwest that values healthy rivers and forests and fills their glasses with clean drinking water from wild places, ultimately shares common cause with our wild salmon and steelhead, which are the silver thread that holds our region’s ecosystems together,” said Mark Sherwood, Executive Director of the Native Fish Society. “To protect the integrity of our home and our homewaters, federal dam operators in the Willamette River basin must act now to protect our native fish.”

Dams on four key tributaries of the Willamette block between 40 to 90% of spawning habitat, and their large reservoirs and high head (dam height) make it nearly impossible for small fish to swim downstream. In 2008, NMFS required the Corps, which operates the dams, to complete numerous actions by specific deadlines in order to recover Upper Willamette Chinook and steelhead. Yet, many mandatory actions have been delayed again and again by the Corps, such as the requirement to improve dam passage for adult and juvenile fish.

“Nearly ten years ago, NMFS determined that the Corps’ operation of the Willamette dams was likely to jeopardize Chinook and steelhead unless significant changes to the Willamette dam operations were made,” said Mark Riskedahl, Executive Director of the Northwest Environmental Defense Center. “NMFS told the Corps that fish passage was a high priority, yet the Corps has dragged its feet in meeting this requirement and others set by NMFS.”

Structural or operational changes to improve downstream passage were expected to be completed at Cougar Dam by 2014, followed by Lookout Point in 2021. Operations to improve water temperature and dissolved gas levels at Detroit and Big Cliff were expected by 2009 and at other dams in 2010. Yet the Corps has routinely dodged actions, skipped deadlines and sidelined state and federal agencies to avoid improving fish passage at the dams on the Willamette. The groups contend that the Corps has developed a pattern of delays that jeopardize the species and can no longer be tolerated if fish are to survive. With the lack of action, declining fish numbers and other new information, the Corps and NMFS need to reinitiate ESA consultation.The groups will not continue to stand idly by while these populations disappear.

“Seeing only 1% of the historical numbers of wild salmon and steelhead return is an obvious failure in action” said Marlies Wierenga, the Pacific Northwest Conservation Manager of WildEarth Guardians. “It would be a heartbreaking loss if we Oregonians let these culturally important fish, which have adapted and thrived here for generations, slip away from existence on our watch.”

Native Fish Society, guided by science, advocates for the recovery of wild, native fish and promotes the stewardship of the habitats that sustain them. For more information, please visit: nativefishsociety.org

Advocates for the West is a non-profit law group that fights to protect the West’s most treasured natural landscapes and native wildlife and is representing the three conservations groups in this matter. For more information, please visit: advocateswest.org