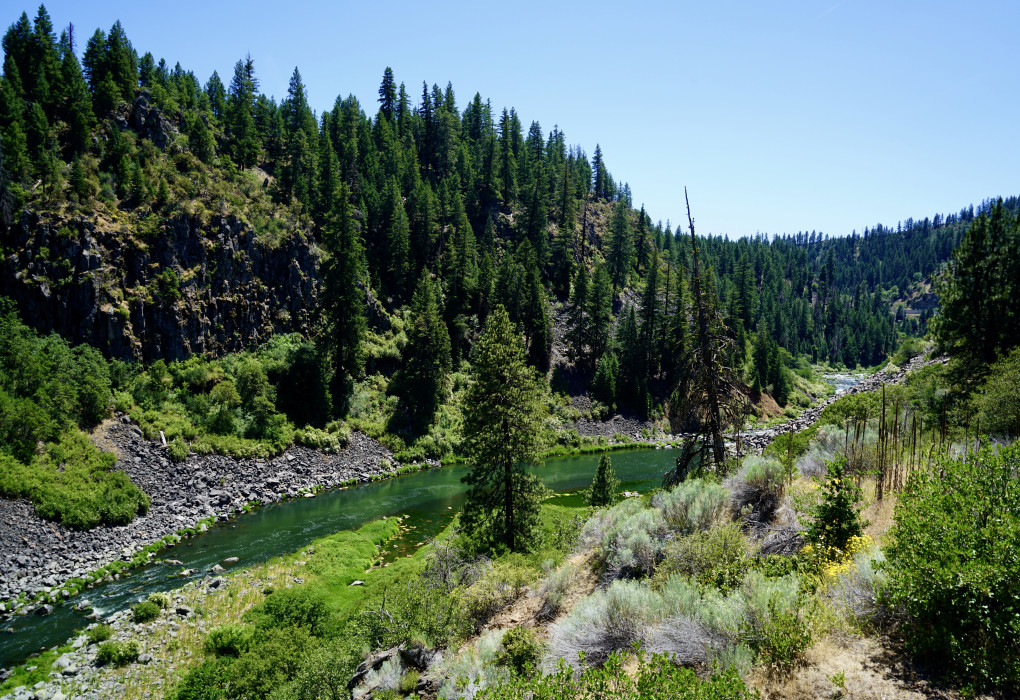 Upper Klamath River Spring Chinook were historically an abundant species of Salmon harvested by locals and tribes and provided a significant benefit to the entire Klamath River ecosystem. In the 1920s, folks of the middle Klamath Region started building the first of four dams. Since then, the Upper Klamath Basin has been inaccessible for multiple species of fish.

Two years ago, I traveled to Klamath Falls, Oregon, to meet with Oregon Department of Fish and Wildlife fisheries biologist Mark Hereford, the expert in charge of creating a plan for reintroducing Spring-run Chinook Salmon to the Upper Klamath watershed. Lately, I have become interested to learn more about Mark’s Plan and how things have evolved since I last met with them. I connected with passionate River Steward and Klamath River advocate Andy Marx with that thought in mind. I asked him to accompany me on a visit to the upper Klamath basin to learn more about the reintroduction of anadromous fishes after the four lower Klamath River dams are removed.

I met Andy and Mark in the small town of Keno, Oregon, just above the Keno River dam (a dam not slated for removal in 2023). The goal of the visit was to check out the Klamath River, explore current water conditions, and discuss how Mark’s reintroduction plan has been working over the past two years.

Mark recently completed his initial work in the Klamath River watershed. The reasoning for Mark’s work was to understand better how Chinook smolts, and all anadromous fish for that matter, would react when being reintroduced to such a large and biodiverse basin. A big question lurking was in the depths of the massive ice age lakes - would these fish leave the copious amounts of food located in Agency and Upper Klamath lakes?

Mark radio-tagged and released 8,000 smolts into the upper Klamath Basin this year. He divided the releases between the Wood River and the Williamson River, significant tributaries to Upper Klamath Lake and Agency Lake. Mark tracked these juvenile, or baby Chinook, and their movements throughout the watershed. The results were astonishing; fish were moving faster than expected through the lakes and downriver to the Pacific ocean.

Mark recovered multiple tags embedded in juvenile Chinook in the lower Keno River section. Further downriver, he found radio tags from fish in J.C. Boyle reservoir and even a dozen up against the face of the J.C. Boyle dam (one of the dams slated for removal). The fact that multiple fish made it through the upper Klamath lakes, down Link River, into Lower Klamath Lake, and down to J.C. Boyle reservoir shows these fish will do what they have evolved millennia ago to do–migrate to the Pacific Ocean.

What did the results of Mark’s work mean? Good things will likely happen! After the four Klamath River dams are removed, these fish will do what they do best, adapt and access the hundreds of miles of habitat now available for them to recolonize. Mark puts it best in a recent article about the project published in the San Francisco Chronicle, “These fish are made to access,” he said. “They love accessing new habitat. That’s how they’ve survived for millions of years. Ideally, we’ll just wait and let the fish do this on their own.”

Native Fish Society believes wild fish deserve a fighting chance to recolonize the upper Klamath River Basin. If a reintroduction should occur, it should be well vetted scientifically and have a strict sunset period after eight years.

After an afternoon of conversation with Mark and Andy, we said goodbye until we met again, agreeing to stay in touch. With the evening closing in, Mark suggested Andy and I check out the Klamath River Canyon below JC Boyle for an evening fish and camp along the banks of the mighty Klamath River.

Andy and I took his suggestion, traveling downriver along a road riddled with potholes and washboards, finding an excellent spot with fishing access 50 yards from our campsite. Mark did advise us of the high fluctuation of flows down in the canyon, part of the PacificCorps Hydropower project. Both Andy and I were familiar with these flows but had never witnessed them firsthand, something we would experience over the next 24 hours.

Fishing that evening was slow, but we witnessed the high flows PacificCorps released during the evening hours this time of year. The wading was treacherous; small boulders the size of basketballs made it challenging to find sound footing. Both Andy and I brought a few fish to hand regardless of the conditions.

That evening, sitting around the campfire, we discussed Andy’s homewaters, the Shasta River, a tributary to the Klamath that provides spawning and rearing habitat for Coho, Fall Chinook, and Summer Steelhead. Andy’s immense passion for protecting the Shasta for the future of anadromous fish in that river and the beloved Klamath was evident. He shared his story of moving to Northern Caliornia and falling in love with the wild, the wild he continues to fight and protect.

The next day, Andy and I awoke to a river close to a third of the size it was the evening before. The structure of large boulders, cattails, and other habitats was now visible, uncovered from the water depth. We immediately discussed what massive ecological issues daily water fluctuations like this would cause to the fish and the wildlife that called this canyon home.

After a short fish that morning we headed upriver, just below the power turbines for PacificCorps. We sat and watched, placing a time-lapse video on the rising waters from the generation of power. It wasn’t instantaneous, but the river tripled in size within one hour, something I had never seen before except during a flash flood or torrential downpour.

Altogether, the trip was fantastic. Mark was a gracious host sharing all the details of his most recent reintroduction plan. Time is always well spent with Andy; we always connect, speak to conservation, and have fun while making a plan for a future of more wild fish.

With everything going on in the world today, it brings hope that we have many wonderful people out there doing great things to help benefit the future of our wild places and species. Advocates working hard to conserve and protect the natural world. It is advocates like Andy and Mark that will help achieve our ultimate goal of restoring abundant wild fish, a free-flowing Klamath River, and thriving local communities in the Pacific Northwest.