​We're sharing stories of wild, native salmon and trout populations that are flourishing in the absence of hatchery programs: either because a hatchery program never existed or has been removed. If you would like to contribute to this collection, please fill out the form at the bottom of the page.

The Salmon River Hatchery was built in 1975 and first released yearling Coho Salmon into the river in 1978. In 2005, it was determined by ODFW biologists that the hatchery was the principal threat to wild salmon and the Coho hatchery program ended in 2008, though Chinook are still produced at the Salmon River Hatchery. Within a few years of the Coho hatchery program ending, the number of natural spawners in the Salmon River were equal to or even greater than the number of hatchery Coho salmon that had been returning for the previous ~30 years. This was true even when conditions were generally unfavorable for salmon between 2009-2016.

Recent research indicates that there has been a substantial increase in Coho productivity and abundance of wild Coho since the end of Salmon River Coho hatchery program. In addition, rivers where hatchery Coho stocking had previously ended already had higher abundances and productivity in the same years where there were low returns of both hatchery and wild Coho in the Salmon River (Jones et al. 2018).

Size of Wild Population During Hatchery

All data other than pre-hatchery estimate from Jones et al. 2018.

The Metolius River was one of the first trout rivers to be managed as a wild, native fishery in the state of Oregon. Stocking of hatchery rainbows began in the Metolius in 1938. Over twenty five years ago, wild fish advocates campaigned to rewild the Metolius and despite stiff local opposition, stocking of rainbow trout ceased in 1996. Today, redd counts have increased fifteen fold since counts began and the trend is continuing to move upwards. The Metolius is one of the best examples in the West that demonstrates wherever healthy habitat and cold water persists, mother nature can and should be left alone to work her magic. The Metolius's native fish are an incredible, abundant natural resource there for all of us to appreciate.

Size of Wild Population During Hatchery

141 redds were counted between the headwaters and Spring Creek in 1995-1996, the last year of the hatchery program.

In 2019-2020, the most recent year for which redd counts are available, 2,037 redds were counted between the headwaters and Spring Creek. 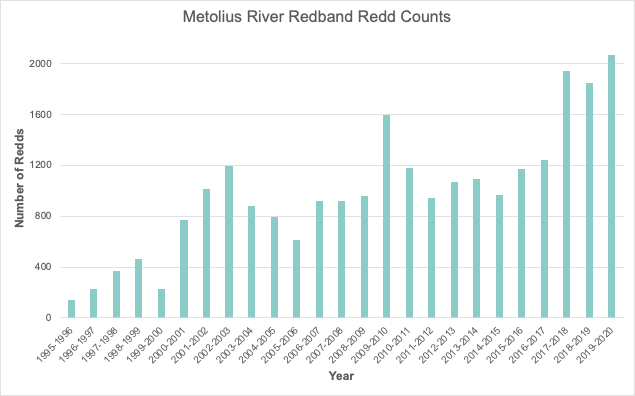 The native “Redside” Rainbow Trout of the McKenzie River was an established destination fishery well before World War II. Post-war, ODFW began a program of outplanting out-of-basin hatchery origin fish in the river. In 1963, following their construction of several flood control dams on the river, the Army Corps of Engineers (Corps) built a new trout hatchery adjacent to Leaburg Dam (38.8 river miles above the confluence of the McKenzie River with the Willamette River). The rationale for the hatchery was to mitigate for the losses to the Willamette Basin fisheries caused by the dams. Over the years various stocks of Rainbow Trout were used in the hatchery’s outplanting program. Production was largely managed to meet demands from local anglers rather than any established limits regarding the impact of the hatchery stock on the native Redside population.

Though there had been no systematic population count, local anglers reported that they were encountering increasingly diminished numbers of Redsides, possibly due to interbreeding with or competition from hatchery trout. To partially assuage these concerns, the hatchery stock was converted to a mostly sterile (trisomy) strain. This likely answered any concern regarding gene-flow from hatchery rainbows reducing fitness of the wild spawning fish, but did not speak to possible competition between the native and hatchery stocks for resources (food and habitat). As in any situation where data are scarce, there was considerable disagreement among the fishing communities regarding what, if anything, should be done regarding the status of the Leaburg Hatchery trout program.

In 2009, ODFW announced that it would cease outplanting hatchery fish in a 5.1 mile section of the Lower McKenzie River. Seeing an opportunity to finally estimate the impact of hatchery stock, a group of conservation minded anglers, with cooperation from the local ODFW staff, designed a program to measure the effects of the hatchery stock removal on resident fish populations. Financing for study costs came from donations from local clubs and conservation organizations. From 2010 through 2013, 108 trained volunteer anglers floated and fished the study section using a “mark and recapture” model to estimate the numbers and physical distribution of species. The study involved 277 angling trips for 2,558.5 hours on the river.

After two years from the cessation of hatchery fish planting, the density of native Redside trout in the study section had more than doubled; at the end of the fourth year the increase was more than 300%. In parallel, the number of native spawning Cutthroat Trout also increased, but to a lesser degree. Interestingly, a parallel study by ODFW using electrofishing methodology came to the same result regarding the proportional changes in the fishery.

As a consequence of this study result, ODFW has continued to refrain from planting hatchery trout in this 5.1 mile section of the river, and the native Redside fishery there has recovered. However, the study results have not resulted in removal of all hatchery trout outplants from the rest of the river, although the study results suggest that it would be possible to quickly reestablish a flourishing native fishery throughout the McKenzie absent the hatchery program.