Two of the most common questions we receive at Native Fish Society are “how exactly do hatchery fish harm wild fish?” and “are there any examples of wild fish doing well after a hatchery program ends?” Part II of this series addresses the second question. Click here to read Part I.

One of the best documented examples we have of the revival of a wild population is Coho in the Salmon River (north Oregon Coast). While most Coho runs in Oregon have been doing well over the past few years, ODFW researchers monitoring Coho in the Salmon found that they performed as well or better than Coho in nearby rivers that still had hatchery programs.1

The Salmon River Hatchery was built in 1975 and first released yearling Coho Salmon into the river in 1978. In 2005, it was determined by ODFW biologists that the hatchery was the principal threat to wild salmon and the Coho hatchery program ended in 2008, though Chinook are still produced at the Salmon River Hatchery. Within a few years of the Coho hatchery program ending, the number of natural spawners in the Salmon River were equal to or even greater than the number of hatchery Coho salmon that had been returning for the previous ~30 years. This was true even when conditions were generally unfavorable for salmon between 2009-2016. 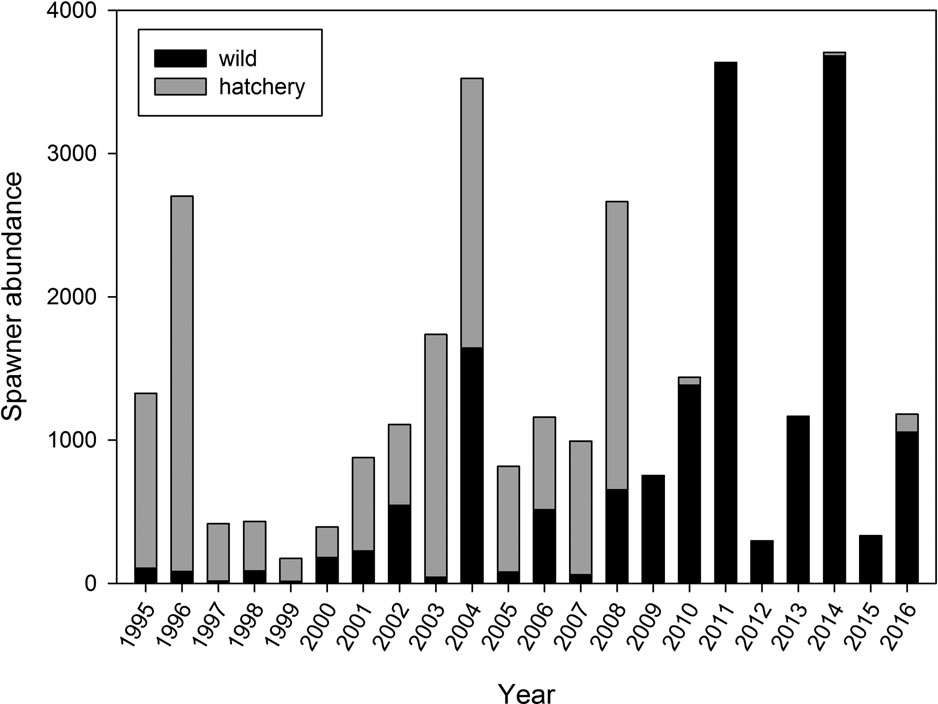 Figure 2 from Jones et al. 2018 showing the number of hatchery-reared and wild adult Coho salmon spawning in the Salmon River 1995-2016.

Recent research indicates that there has been a substantial increase in Coho productivity and abundance of wild Coho since the end of Salmon River Coho hatchery program. In addition, rivers where hatchery Coho stocking had previously ended already had higher abundances and productivity in the same years where there were low returns of both hatchery and wild Coho in the Salmon River.

We are currently collecting even more stories celebrating Wild Abundance. But there are a few things that make this difficult. First, it is pretty unusual for an anadromous hatchery program to end in the first place. Second, when hatchery programs end, state fish and wildlife departments typically stop monitoring their wild run counterparts, so we are left with anecdotes rather than hard data. One thing you can do is request that state fish and wildlife agencies continue to monitor wild populations after hatchery programs end.