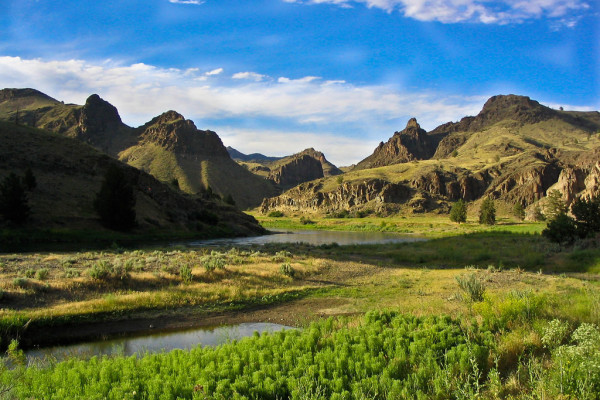 Send us a message about the John Day River

Much of the Lower John Day flows through proposed wilderness areas, while the upper river provides critical habitat for the largest and most diverse native fish populations in Oregon. Among the species that call this river home are endangered bull trout and summer steelhead, along with chinook salmon, redband trout, and westslope cutthroat trout. Not only is the John Day an extensive watershed in Oregon, it has a multitude of productive tributaries for wild spring chinook, summer steelhead and its two threatened species, west slope cutthroat, and bull trout.

The John Day has the distinction of the largest basin in Oregon managed for wild salmonids. It is an important reference stream for the Columbia River Basin, since most of the other watersheds are influenced by massive hatchery releases. Habitat problems are wide spread throughout this basin and include loss of riparian areas, cattle grazing, water diversions for agriculture, hot water in summer, the introduction of non-native fish like small mouth bass and more.

Fish recovery issues in this basin include the threatened status of wild summer steelhead, habitat problems, stray hatchery fish on natural spawning areas, increased angling pressure, and exotic introduced fish. NFS is now working on a fish management plan that would provide the protection for the John Day wild salmonids, and trying to remove the use of bait of the river.

A Guaranteed Good Time for A Good Cause! Join the Native Fish Society Thursday, July 19th, 2018 at the Miracle Barn in Bend, OR for a great evening of fellowship, festivities, and a live auction...