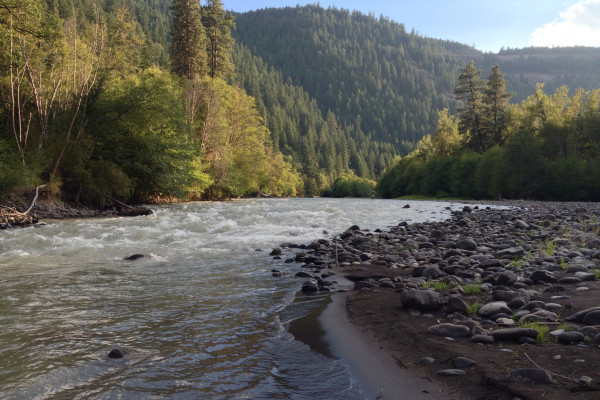 Send us a message about the Klickitat River

Thank you for the opportunity to comment on the proposal to include hatchery programs as part of Pacific salmon and steelhead species listed under the Endangered Species Act (ESA). As a diverse...

Historically, the Klickitat had one of the strongest runs of Spring Chinook in the Northwest as well as large runs of Summer and Winter Steelhead. Significant habitat degradation from many years of poor logging practices, years of overfishing and the introduction of non-native Fall Chinook and Coho Salmon have helped to contribute to severe reductions in wild Spring Chinook and Steelhead populations.

The Klickitat is known throughout the Northwest as one of the premier Summer Steelhead rivers in the Columbia Basin. Large numbers of hatchery steelhead plants inhibit the full recovery of wild fish to pre-industrial numbers. Steelhead and Fall Chinook are transplanted to the river from off-site hatcheries. This results in steelhead interbreeding with wild fish, degrading the genetic makeup of the wild population. Fall Chinook and Coho Salmon now spawn through much of the river.

A Spring Chinook Hatchery operates near the town of Glenwood, WA and has had poor productivity in recent years. Wild Spring Chinook are a rarity among anglers and in spawning surveys. Hatchery Fall Chinook now have a strong presence and contribute to the poor returns of Spring Chinook.

Lyle Falls at river mile 1.4 historically blocked passage of Fall Chinook and Coho Salmon. The river tends to lack enough flow in the autumn for salmon to climb the falls. “Improvements” in the falls (dynamite) as well as the construction of a multi-million dollar fish passage center have allowed these fish to establish populations upstream of the falls.

The bright spots for the Klickitat are that the river basin is largely undeveloped and logging operations have been sparse in recent years. Improvements in habitat have lead to more productive spawning habitat for wild fish. Passage at Bonneville Dam, poor conditions in the Columbia River, a popular sport fishery and harvest of wild fish from by the Yakama Nation all hamper the recovery of wild fish, and are used to justify the continued planting of hatchery fish. The good news is that improvements in habitat, the lack of dams and logging operations and good water quality make it an ideal place for the recovery of wild, native fish.