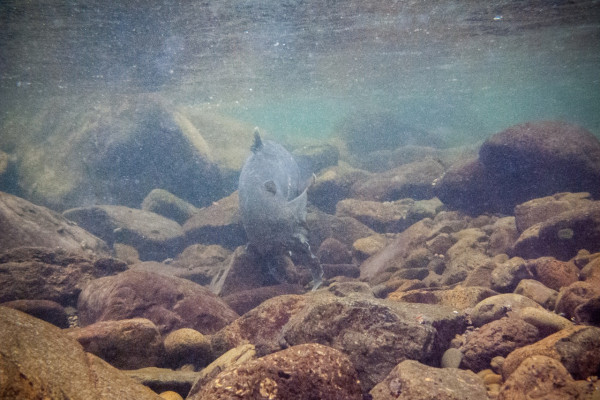 Send us a message about the Salmonberry River

By Ian Fergusson Joyce Sherman already provided a history of the monitoring program in the Salmonberry. As part of that program, we started monitoring temperatures in 1993, and continued through...

Native Fish Society, along with our co-petitioners at the Center for Biological Diversity and Umpqua Watersheds, have filed a notice of our intent to sue the National Marine Fisheries Service to...

The Salmonberry supports two runs of wild fall chinook: an early fall run that is part of the Nehalem “summer chinook” population, and a later fall run. Resident and anadromous cutthroat trout are present in the Salmonberry. A small landlocked population of rainbow trout persists in the upper reaches of the Salmonberry’s North Fork.

Current angling regulations for the Salmonberry are designed to help protect steelhead. The mainstem is open for catch-and-release angling from December 1 through March 31, and closed the rest of the year. The bulk of the steelhead spawning occurs in April and May, after angling closes. Tributaries are closed to all angling year-round. This protects juvenile steelhead from the mortality associated with trout angling.

There are several factors that have helped protect the Salmonberry. One is its remoteness. A few logging roads approach it in the upper reaches, and the Nehalem River road allows access at the mouth. The Port of Tillamook Bay Railroad, currently not operational, follows the river from the mouth to the upper reaches. If there had been a road following the river canyon, as on the Wilson River to the south, the story might have been very different. Another factor has been management by “benign neglect”: except for a few failed hatchery plants in the early 1960’s, the river has been free of hatchery influence. The period of comparative quiet following the last Tillamook Burn allowed the watershed to recover undisturbed, until timber harvest began in the 1990’s.

Until December of 2007, the Salmonberry was excellent winter steelhead habitat. The 2007 stormcaused tremendous damage to the river. Logging roads on steep headwalls failed, sending massive debris torrents down key tributaries, stripping them of riparian vegetation for up to two miles. Portions were scoured to bedrock. Stream channels were simplified. The mainstem sufferedstraightening of the channel, deep scouring, and loss of deep pools. The spawning gravel is filled with fine sediment that will persist for years. Summer water temperatures have increased. The railroad that occupied the mainstem valley was destroyed, and will probably never be rebuilt. The river can heal, if nature is allowed to run its course.

The greatest challenge now facing the Salmonberry is land use: specifically, timber harvest. The watershed is nearly all forestland, a mix of private industrial timberland and Tillamook State Forest. The trees that grew up after the Tillamook Burn are now being harvested. Harvest and road construction have increased dramatically in the last decade. The pressure on the watershed will only increase.

Volunteer crews have conducted steelhead spawning surveys and temperature monitoring since 1994. If you are interested in helping out with monitoring work, advocacy, restoration work, or simply want to learn more about the Salmonberry, please contact any of the Salmonberry’s River Stewards.

Currently, Native Fish Society is participating in the development of a Salmonberry Corridor Concept Plan.

The Salmonberry Coalition, a steering committee involving public and private partners and anchored in Tillamook County by the Port of Tillamook Bay, local government and elected leaders, has been established to make recommendations on re-linking the communities along the rail corridor – from Banks to Tillamook – by converting the no-longer functional portions of rail line to a trail and adding a trail adjacent to the viable sections of rail. This unique 86-mile recreational opportunity, steeped in history, natural beauty and adventure, can connect urban and rural Oregon – the Portland area to the Coast – while tapping into a wide network of existing recreation trail and facilities, educational opportunities and heritage sites.

While we are in support of the concept of this plan, we are concerned about the ecological health of the river that would be impacted by the development of a “Rail and Trail” option in the Salmonberry River Corridor.

To learn about the plan, visit The Salmonberry Corridor Concept Plan.

You can read a letter from our Coalition of Salmonberry Fish Groups regarding the development of this plan.