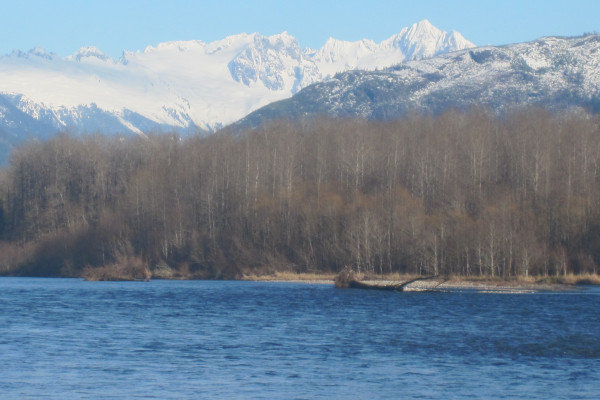 Send us a message about the Skagit River

The Skagit has spawning populations of all 5 species of pacific salmon as well as bull trout, and coastal cutthroat trout. Winter and summer run steelhead are also present, both of which are listed under the Endangered Species Act. The Skagit still has a large amount of spawning habitat and the potential for native fish recovery is high, maybe the best in the Puget Sound region. Three Tribes call the Skagit home, the Upper Skagit, the Lower Skagit and the Swinomish. The tribes have Co-Manager Status of the resources of the Skagit. The fish within the Skagit watershed encounter many of the same obstacles as most rivers near population centers including spawning tributary degradation, logging, dams, commercial fishing, dikes and farm runoff, water withdrawal and hatcheries, though a 2014 lawsuit won by Wild Fish Conservancy has halted hatchery steelhead plants for a 12 year period.

The Skagit is world famous and conjures up visions of legend, spring chinook of 60+ lbs, coho and pink salmon runs of epic proportions. One only needs to read Ralph Wahl’s “One Man’s Steelhead Shangri La” to understand the lore of Skagit Steelhead and why so many legends cut their steelhead teeth there. There is even a spey casting method named for the river, that is used world wide. Skagit winter steelhead at least, seem to be on the upswing with runs that have been hovering around 7,000 to 8,000+ fish the last few years. If any river can even approach historic levels of recovery it’s the Skagit. We must do our best to see that the river has the chance to make that happen.

Aquaculture net pens operate in the public waters of Washington state. The state government sets rules for the pens, monitors and inspects the pens, and when things go wrong, the state must step in...

To Open or Not to Open the Skagit Steelhead Fishery

To Open or Not to Open the Skagit Steelhead Fishery This question is on the minds of many steelhead anglers across the Pacific Northwest as state and federal fisheries agencies currently weigh...