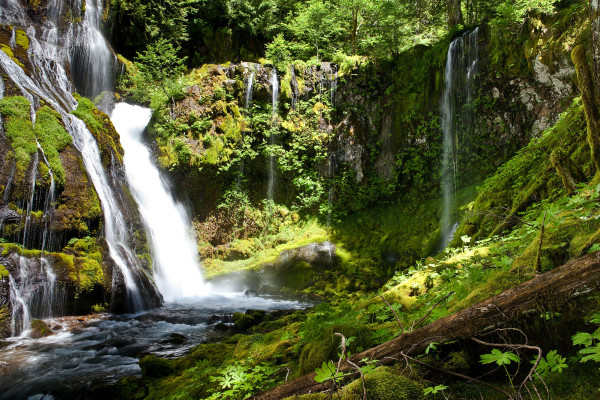 Send us a message about the Wind River

Then As It Was, So Shall It Be Again History and Restoration After a year of stakeholder meetings held by the Washington Department of Fish and Wildlife (WDFW), the Wind River is on track to...

The Wind River is a tributary of the Columbia River, in the state of Washington. Its entire course of 30 miles (48 km) lies within Skamania County. Crusattes River is an old variant name.

In 1981, the Wind was entangled in controversy as the first river in the state of Washington to be considered specifically for wild steelhead management through a careful selection of angling regulations and a coordinated effort by the Forest Service and the State Department of Game to maximize the spawning and rearing potential of the tributaries and the upper main river.

The Wind was a native summer steelhead fishery until the sudden maturation of hatchery programs in a mid and late 1960’s that completely imbalanced the often precariously small numbers of wild spawning fish.

Histories obtained from early bait and fly anglers revealed that the Wind had a remarkable run of summer steelhead that made initial river entry in March and continued to build below the falls until sometime in June. Common estimates were 500-1000 “springers” (early return summer steelhead) compressed into the main falls pool alone with over 100 steelhead in each of the six to eight pools below! It seems possible that the spring run was a minimal of 1500 steelhead!

By July the steelhead had spread out through the canyon pools above the falls, and with a continued summer entry, they were likely 2,000 strong by August. In September a run of late summer arrivals made entry to the Wind that likely included Idaho strays seeking temporary cool flows. The Wind’s own fall run was substantial and probably consisted of of minimal of 500 fresh entries in September/October.*

It would seem a safe estimate that the Wind, at it’s best, had a historic summer run of no less than 2,500 steelhead with perhaps as many as 5,000, dependent on individual pool-count estimates.*

Forest Service data indicates that a large splash dam was constructed on the flats above Hemlock (near the present Cannavial road) sometime in the 1930s. The Dam was a complete block to migration into upriver spawning and rearing habitat, and it was labled a severe limiting factor to Wind River production in fishery reports until the Carson Lumber Company was compensated for it’s removal by the State Fish and Game departments in February 1947. The upper main river flats were logged around that same time, resulting with disastrous effects of a wandering river channel.

In 1965, continuing sporadically to 1969, the Trout Creek Flats were extensively clear cut resulting in significant steelhead loss. The Trout Creek drainage had a history as one of the top two summer steelhead spawning tributaries.*

The Washington Game Commission ratified a wild steelhead management plan for the Wind River that eliminated hatchery plants of both resident rainbow and steelhead (January, 1982). In August of 1983, Washington Departement of Game, in response to the strong El Nino’s effect on steelhead in 1982, recommended to the Washington State Game Commission that the the hard-fought cessation of Wind River hatchery steelhead be reversed to again allow plants of Skamania Stock summer steelhead. In 1984, those outplantings were resumed.**

In 1983 the Clark-Skamania Flyfishers began to snorkel Wind River with annual surveys in order to better document any changes in Wind River’s adult steelhead returns and juvenile production. Through annual reports, the Flyfishers have documented significant increases of wild juvenile steelhead production, numbers of wild resident-sized rainbow, and returns of wild adult steelhead on Wind River. It was hoped that the accumulated data in coming years would build a strong case for returning the Wind River to the full wild steelhead plan that would eliminate hatchery plants all together.**

Hatchery steelhead plants were completely stopped in 1997 and in March 2014, the Wind was designated by Washington Department of Fish and Wildlife (WDFW) as a Wild Steelhead Gene Bank where it would be off limits to any future plantings of hatchery steelhead.