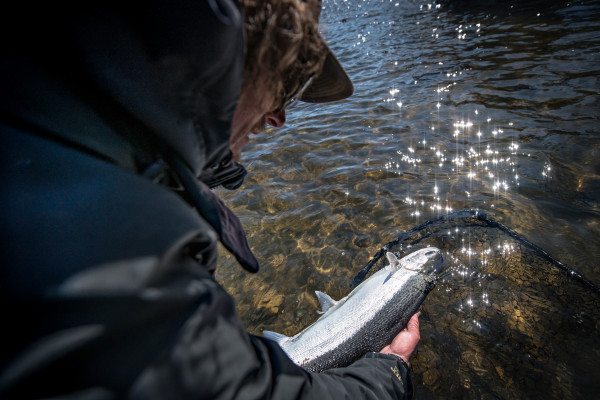 Send us a message about the Oregon Coast Steelhead - Responsible Angling

Oregon’s wild, native coastal Steelhead Trout runs are in decline. We were fortunate that 2020 runs showed some signs of improvement, but the downward trend from historical levels is evident. In 2018 and 2019, North Coast Steelhead returned below Critical Abundance thresholds. ODFW established these thresholds as the point at which “the conservation of the population could be in jeopardy if the downward trend continues.” According to estimates made by fisheries biologist and NFS fellow, Chris Frissell, the population of Steelhead in the Nehalem River in 2018 has declined by 90% since 1924.

Compounding the threats facing Oregon Coast Steelhead is a recent change in Steelhead management in Washington. On December 8th, 2020, the Washington Department of Fish and Wildlife (WDFW) adopted an emergency rule change on the Olympic Peninsula’s rivers. These rule changes include:

These emergency regulations come in the light of not achieving critical abundance of spawning wild steelhead for four consecutive years. That’s right, four years in a row, the Olympic Peninsula fell below their threshold to sustain healthy populations.

These regulation changes will affect many watersheds located in Oregon. Guides and anglers who traditionally fish from a boat will be inclined to travel to Oregon to angle for winter Steelhead. We cannot blame them; winter steelhead fishing is their livelihood.

These pressures, coupled with already struggling populations, put our wild winter steelhead at significant risk. The good news is that anglers can take individual action right now to help Oregon’s wild, native Steelhead recover. If you angle for Steelhead, here are a few simple ways to reduce your impact:

There’s nothing quite like the thrill of landing a big, wild Steelhead, but if we want to enjoy catching them in the future, we need to act now. Our actions can help prevent coastal Steelhead populations from dropping below Critical Abundance levels again. By incorporating these best practices into our angling, we can help give Oregon’s wild, native Steelhead a chance to recover.