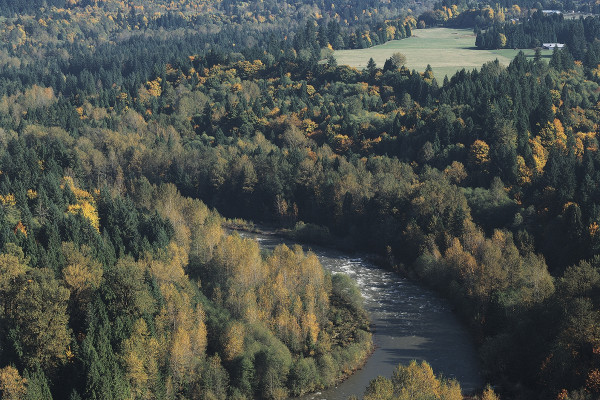 Send us a message about the Sandy River

The Sandy and its tributaries support several anadromous species, such as spring and fall chinook, coho salmon, and winter steelhead. There are also resident populations of cutthroat and rainbow trout. Currently, coho, fall chinook, and winter steelhead have rather high risks of extinction in this watershed. With proper management and cooperation from all interested parties, it is possible to achieve the goal of delisting these populations and bringing their extinction risk to much lower levels.

In the last century, the anadromous populations have seen a significant decline in comparison to the large historic runs of the past. Their decline can be attributed to many factors, including previous hydroelectric dams, channelization, overharvesting, reductions in spawning and rearing habitat, road construction, timber harvest, and municipal water supply operations. Interbreeding of hatchery and wild fish is also a concern. Hatchery management continues to change over the years as attempts are made to reduce this limiting factor.

Fortunately, after nearly a century of operation, PGE (Portland General Electric) has removed both the Marmot Dam on the Sandy, and the Little Sandy Dam on the Little Sandy River. These dam removals have allowed the Sandy to become free flowing for its entire course. Miles of previously unreachable habitat are now available again. This was a critical success in an ongoing battle to restore this watershed.

The Oregon Department of Fish and Wildlife is currently taking comment on a proposal to open 25 miles of the Sandy River to boat angling access under the auspices of providing a conservation...

In the 2017 legislative session, Senate Bill 3 was passed by the Oregon State Legislature and signed by Gov. Brown that restricted in-stream motorized mining in all of Oregon's Essential Salmonid...