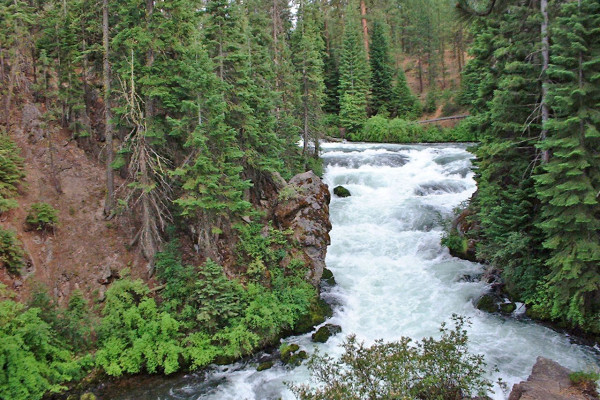 Send us a message about the Upper Deschutes River

This fall, 2021, there is an opportunity to take part in a cutting-edge project to determine if threatened Bull Trout still reside in the Upper Deschutes basin. The focus will be on Little...

Drift Boat for a Benjamin

The Deschutes above Lake Billy Chinook is composed of an upper and a middle section and has varied characteristics. It is fed by a few major tributaries including the Little Deschutes/Crescent Creek, Fall River, Tumalo Creek, and Whychus Creek. The Deschutes and its tributaries are dammed for irrigation purposes in a variety of places, including major dams that create Crane Prairie and Wickiup Reservoirs.

The single largest issue for native, wild fish in the upper Deschutes is the lack of fish passage and operation of several dams. The upper Deschutes is essentially managed as a large irrigation canal, especially in the dead zone between Fall River and Wickiup Reservoir. 100% of the water in the river has been allocated to various irrigation districts for decades. The operation of the dams creates flows that alternate between what would historically be considered flood and drought levels on an annual basis.

During irrigation season water is released from Wickiup Reservoir and later diverted into irrigation canals at various points far down river. These high flows undercut stream banks and fill spawning beds with silt. The dams also eliminate the natural replenishment of spawning materials. As a result, there are few spawning beds left of the upper Deschutes. During the winter, flows are cut back to a trickle as the reservoirs are refilled. These low flows expose fish and the macroinvertebrates that are their food source to freezing temperatures. As a result, there are few wild, native fish in the upper Deschutes.

Recently, a group of stakeholders including government agencies, NGOs, and the irrigation districts have started meeting to discuss the issues and begin to explore solutions. It is very early in this process, however, and any solutions are years away.

Hundreds of millions of dollars have been invested in the reintroduction of anadromous fish (steelhead and salmon) above Lake Billy Chinook by providing fish passage around the PRB dam complex. In 2010 the first downstream migrating anadromous fish were passed through the facility and in 2010 the first adults returned. By all accounts, however, returns thus far have been disappointing. Much effort continues to examine reasons for this, but the continued need for habitat restoration, protection and additional fish passage through upstream barriers is clearly part of the equation. Organizations like the Deschutes Partnership have lead the way on habitat restoration and protection efforts.

Local efforts are underway to protect prime spawning habitat on the Middle Deschutes and Lower Whychus Creek through a federal wilderness designation. Directly upstream from Lake Billy Chinook, the Deschutes flows unencumbered through a deep and rugged canyon. This section of the Deschutes River is fed by abundant cool springs, maintaining a fairly consistent temperature and water level year round, and making it ideal habitat for native fish. At the core of the 19,000 acre Whychus-Deschutes Wilderness Proposal, Whychus Creek enters into the Deschutes, also stoked by cool water from Alder Springs and numerous seeps along its course. Although salmon and steelhead passage up the Deschutes was historically restricted by the natural barrier of Big Falls, Whychus Creek provided productive spawning and rearing habitat for anadromous fish in the Upper Deschutes Basin. The Deschutes River also contains critical habitat for bull trout, a threatened species under the Endangered Species Act. The Oregon Natural Desert Association and the Friends and Neighbors of the Deschutes Canyon Area are leading the charge to permanently protect this irreplaceable native fish habitat.

Other important issues for native, wild fish currently include flows in Tumalo Creek, fish passage at Mirror Pond Dam, and the designation of the lands around a section of the middle Deschutes as wilderness.

This invaluable resource for citizen advocates, co-created by Tom Davis and Fish Biologist, Clair Kunkel, reveals the many barriers to wild fish that remain on the Upper Deschutes River.

If you enjoy the Deschutes and desire to learn how we can restore this prize of the American West to historic conditions please follow the link.

As always, NFS greatly appreciates the efforts of all of our River Steward volunteers and is honored to share with you their contributions.