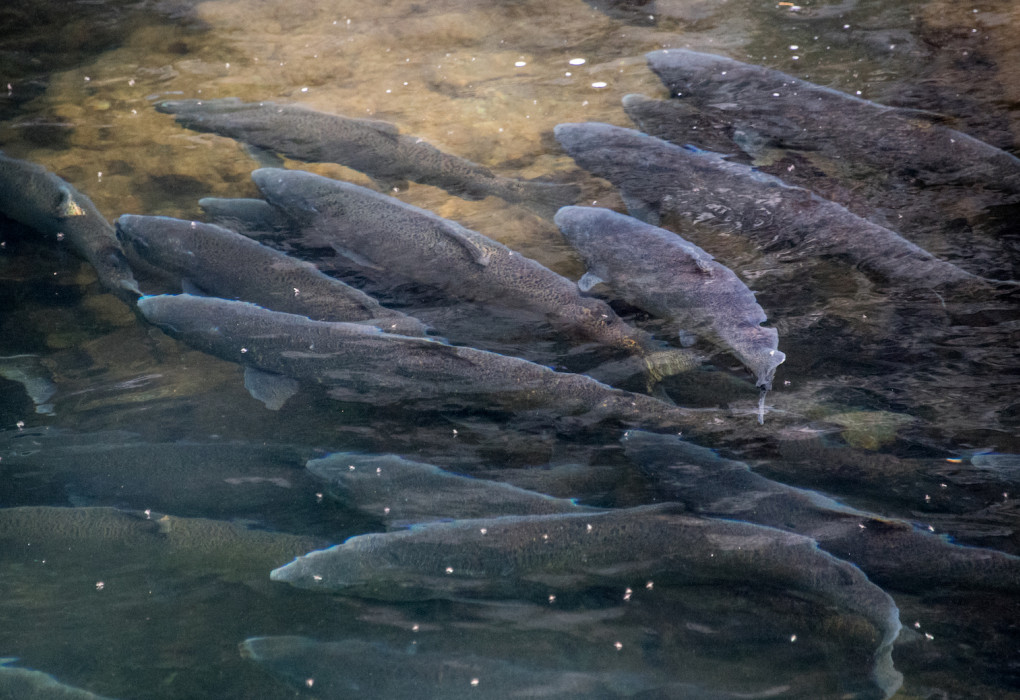 The safeguards would apply to salmon from below the Columbia River to Cape Blanco. Spring chinook, which are distinct from fall-run salmon, return in the spring from the ocean to freshwater rivers, staying for many months in deep pools until fall to spawn.

“Spring chinook up and down the West Coast have been cherished by many communities for their large size and exceptional taste, but sadly have undergone massive declines nearly everywhere they exist,” said Conrad Gowell, Fellowship Program Director with the Native Fish Society. “We hope this petition will be the beginning of a sustained and successful effort to reestablish abundant spring chinook on the Oregon coast.”

All runs of Oregon coast spring chinook have severely declined, and they have been completely wiped out in three coastal Oregon streams. Remaining spring chinook runs are threatened by depletion of stream flows during critical periods in summer and fall, due to logging, dams and water diversions. Other threats include habitat degradation and elevated stream temperatures caused by logging and road building, pollutants, river channelization, harvest in commercial and sport fisheries, predation by invasive fish, and climate change.

“Spring chinook are truly the king of salmon, but Oregon’s springers need protections for the cold, clean water and deep pools they require for survival,” said Jeff Miller, a senior conservation advocate at the Center for Biological Diversity. “The Endangered Species Act has saved 99 percent of species under its protection, and it can save these magnificent fish.”

Four salmon hatcheries operating on the Oregon coast artificially propagate spring-run salmon. The goal of these hatcheries is to produce fish for anglers, but in recent years there have not been enough returning adult salmon to produce the next generation. Additionally, hatcheries not aimed at helping rebuild fish stocks may be jeopardizing wild spring chinook by creating competition between hatchery and wild fish and unintendedly producing hybrid spring-run and fall-run chinook. Hybrid salmon are not fit for long-term survival in natural habitats, and are likely contributing to the disappearance of spring chinook.

“Spring chinook are a keystone species that benefits an entire expanse of the web of life, from bears to humans to forests to orcas,” said Stanley Petrowski with Umpqua Watersheds. “We are asking the Fisheries Service to recognize the significant role of springers in our complex coastal ecosystems and give them the protections they need for recovery.”

Early return salmon and steelhead in California are also imperiled. In 2011 the Center petitioned to list spring-run chinook in the Klamath River under the Endangered Species Act, but the National Marine Fisheries Service denied the petition, arguing spring-run aren’t distinct enough from the more abundant fall-run chinook.

Since then several scientific studies have shown that spring-run fish are indeed genetically distinct, with the evolution of early returning salmon and steelhead occurring millions of years ago. This difference in spawning run timing is highly unlikely to occur again if these distinct early return populations are lost.

The Karuk Tribe re-petitioned for Klamath springers in 2017, and in 2018 received an initial positive finding from the Fisheries Service that listing may be warranted. In 2018 Friends of the Eel River petitioned to list summer-run steelhead in Northern California, and the Service made a positive initial finding in April 2019. The agency is currently conducting status reviews for Klamath spring-run chinook and Northern California summer steelhead.

The Native Fish Society is a nonprofit conservation organization that cultivates a groundswell of public support for reviving abundant wild fish, free-flowing rivers, and thriving local communities across the Pacific Northwest.

The Center for Biological Diversity is a national, nonprofit conservation organization with more than 1.6 million members and online activists dedicated to the protection of endangered species and wild places.

Umpqua Watersheds is dedicated to the protection and restoration of the ecosystems of the Umpqua watershed and beyond through education, training, advocacy and ecologically sound stewardship.